Skip to main content
SPRING CYBER EVENT STARTS NOW: And it's a really BIG deal! Up to 88% off through 5/24>
It's Always Darkest Before the Fridge Door Opens: Finding Joy in the Cold Places of Life - eBook
By: Martha Bolton, Phil Callaway
Stock No: WW9976EB 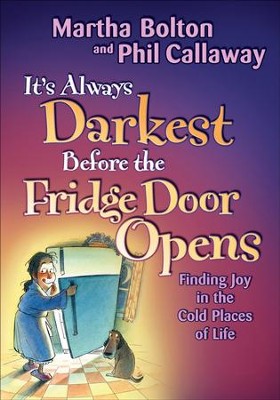 It's Always Darkest Before the Fridge Door Opens: Finding Joy in the Cold Places of Life - eBook

▼▲
Has your sense of humor dried up like a month-old carrot in the crisper drawer? Here's a spritz of good humor, honest reflection, and biblically sound advice about the things that can sour your day including people, traffic, e-mail, alarm clocks, and vacations. Discover six refreshing secrets to finding joy in the midst of trouble and stress. Paperback.

▼▲
Laugh Your Way Through a Sticky Situation

Life is full of problems: there's not enough time in the day, your kids won't stop fighting, and those cars won't let you merge onto the highway. Not to mention the really bad stuff: your best friends are getting divorced, and your close relative is sick. It's enough to make you want to scream and cry and stomp your feet. But then you remember you're not three.

Life is like a refrigerator--it offers us a lot of good things, but it can be smelly if left for too long.

Don't let life be a stinker. God provided the equipment to laugh--we just have to remember to use it. Martha Bolton and Phil Callaway show how they look on the bright side of life as they teach us creative ways to deal with telemarketers, remind us that we could cope with the world if it wasn't for the people, and explain why M&Ms are healthy. Where there's a will, there's a way, and Martha and Phil will help you find a way to laugh yourself back into a joyful life!

▼▲
MARTHA BOLTON is a full-time comedy writer and the author of more than 50 books, including Didn't My Skin Used to Fit? She was a staff writer for Bob Hope for 15 years and has written for Phyllis Diller, Wayne Newton's USO show, Ann Jillian, Jeff Allen, and many other entertainers. Her writing has appeared in Reader's Digest, Chicken Soup for the Soul, and Brio magazine. She has received four Angel Awards and an Emmy nomination. She and her husband live in Tennessee.

PHIL CALLAWAY is the award-winning author of fifteen books, including Who Put My Life on Fast-Forward? and I Used to Have Answers, Now I Have Kids, and his articles appear in several publications, including New Man, Decision, and Marriage Partnership. A popular conference speaker, he also is a frequent guest on television and radio, including Focus on the Family. Phil, his wife, and their three teenagers live in Alberta, Canada.

▼▲
I'm the author/artist and I want to review It's Always Darkest Before the Fridge Door Opens: Finding Joy in the Cold Places of Life - eBook.
Back
Back