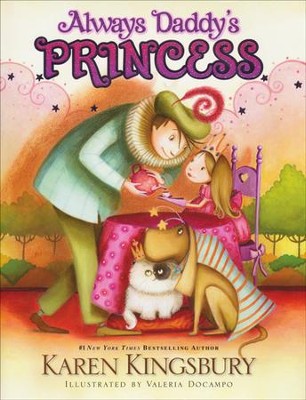 ▼▲
Best-selling author Kingsbury offers a playful yet poignant tale about the treasured dimensions of a daddy-daughter relationship! Following a little girl through tea parties, soccer games, braces, and boys---and enriched by Scripture on each page---this beautifully illustrated storybook illuminates the supportive presence of her father every step of the way. Ages 4 to 7.

Blow the trumpet, sound the horn,

Daddy’s princess has been born!

The timeless journey of a daughter and father is poignantly captured in the story of a girl’s growth from childhood to motherhood. Playful, emotive prose, enriched by the whisper of God’s scripture on each beautifully illustrated page, invites girls and dads to see themselves reflected in this keepsake book and to be reminded of the blessings and the bonds between them. Throughout tea parties, soccer games, braces, and boys, a girl is her daddy’s princess every step of the way.

Born in Buenos Aires, Argentina, Valeria’s academic background focused initially in Fine Arts. She graduated from the University of Buenos Aires with a degree in Graphic Design & Visual Communication. Valeria now illustrates for publishers around the world and investigates the use of new methods and materials in a constant pursuit of new expressive forms.

▼▲
I'm the author/artist and I want to review Always Daddy's Princess.
Back
×
Back
×