Skip to main content
Always By My Side
By: Edward Grinnan
Stock No: WW156496 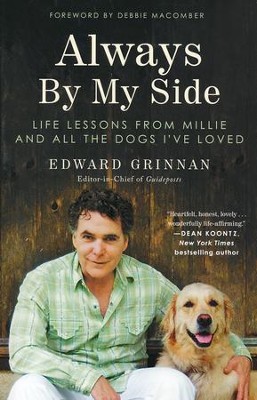 Always By My Side

The editor-in-chief of Guideposts magazine shares the "heartfelt, honest, lovely" (New York Times bestselling author Dean Koontz) story of Millie, his beloved golden retriever, and how she taught him to be a more compassionate person, deepened his faith, and inspired him on his long-term path of recovery from addiction.

In this moving memoir, Edward Grinnan writes about his life with Millie—from their first joyous meeting through her struggle with cancer. Edward shares how her sensitivity, unconditional love, and innate goodness helped him discover those qualities in himself and put his complicated past in perspective.

Poignant and insightful, Always By My Side is an inspiring book that explores the unbreakable bond between man and dog, revealing how faith shapes our love for our dogs, and how our dogs shape our faith. Foreword by Debbie Macomber

▼▲
Edward Grinnan is Editor-in-Chief and Vice President of Guideposts Publications, which includes the magazines Guideposts, Angels on Earth, Mysterious Ways, PLUS, The Joys of Christmas, and Mornings with Jesus. He is a graduate of the University of Michigan, where he won the Avery Hopwood Award in Major Playwriting while still an undergraduate. After a stint as a deckhand on Great Lakes ore boats, he was an artist-in-residence at the Helene Wurlitzer Foundation in Taos, New Mexico. He went on to study playwriting at the Yale School of Drama and received his MFA in 1983. He lives in Manhattan with two blondes—his wife, Julee Cruise, and their golden retriever puppy, Grace. He is the author of The Promise of Hope and Always By My Side.

Debbie Macomber, with more than 100 million copies of her books sold worldwide, is one of today’s most popular authors. Visit her at DebbieMacomber.com.

▼▲
"Heartfelt, honest, lovely... Edward Grinnan’s personal story, rich with dogs——including one special golden retriever——is wonderfully life-affirming."
"Maybe you are a dog lover unable to put into words that powerful bond you feel with your dog. Or you are grieving the loss of a dog. In Always by My Side Edward Grinnan speaks to all of us when we marvel at these creatures and how much they are on our minds and in our hearts."

▼▲
I'm the author/artist and I want to review Always By My Side.
Back
Back