We are OPEN and SHIPPING - click here for shipping estimates
PRE-SUMMER CYBER SALE EXTENDED thru 6/1 ~ Over 2,500 items up to 90% off
Altogether Lovely: A Thematic and Intertextual Reading of the Song of Songs
By: Havilah Dharamraj 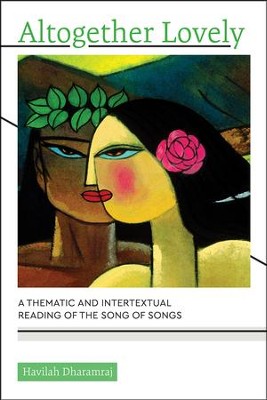 Altogether Lovely: A Thematic and Intertextual Reading of the Song of Songs

The frank eroticism of the Song of Songs has long seemed out of place in the Hebrew Bible. As a result, both Jewish and Christian interpreters have struggled to read it as an allegory of the relationship between God (as husband) and Israel or the church (as bride). Havilah Dharamraj approaches the Song with a clear vision of the genderization of power relationships in the ancient Near East and through an intertextual method centered not on production but on the reception of texts. She sets the Song’s lyrical portrayal of passion and intimacy alongside other canonical portrayals of love spurned, lust, rejection, and sexual violence from Hosea, Ezekiel, and Isaiah. The result is a richly nuanced exposition of the possibilities of intimacy and remorse in interhuman and divine-human relationship. The intertextual juxtaposition of contrasting texts produces a third text, an intracanonical conversation in which patriarchal control and violence are answered in a tender and generous mutuality.

▼▲
I'm the author/artist and I want to review Altogether Lovely: A Thematic and Intertextual Reading of the Song of Songs.
Back
×