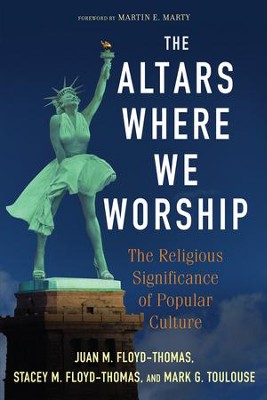 The Altars Where We Worship: The Religious Significance of Popular Culture - eBook

While a large percentage of Americans claim religious identity, the number of Americans attending traditional worship services has significantly declined in recent decades. Where, then, are Americans finding meaning in their lives, if not in the context of traditional religion? In this provocative study, the authors argue that the objects of our attention have become our god and fulfilling our desires has become our religion. They examine the religious dimensions of six specific aspects of American culturebody and sex, big business, entertainment, politics, sports, and science and technologythat function as â€œaltarsâ€� where Americans gather to worship and produce meaning for their lives. The Altars Where We Worship shows how these secular altars provide resources for understanding the self, others, and the world itself. â€œFor better or worse,â€� the authors write, â€œwe are faced with the reality that human experiences before these altars contain religious characteristics in common with experiences before more traditional altars.â€� Readers will come away with a clearer understanding of what religion is after exploring the thoroughly religious aspects of popular culture in the United States.

"This book provides a compelling analysis that expands our understanding of religion by revealing its presence in cultural activities far beyond the traditional confines of churches, mosques, temples, and other sacred spaces. It demonstrates that the intensity of religious devotion is not limited to such traditional locations as churches, temples, mosques, and shrines but actually flourishes in various spheres of our cultural life, such as big business, body and sex, entertainment, sports, politics, and science and technology."

"What is religion and where does one find it? What are the markers of religiosity exposed through popular culture? These are some of the vital questions addressed by this important text. Those interested in a rich and multilayered analysis of how religion is organized and expressed within the everyday language, symbols, and practices of cultural life will find this text an important contribution to scholarship. It is insightful and a much-needed addition to our understanding of the deep significance of the cultural worlds that hold and express religious belief and practices."

"Leaving the safe, stuffy hallways of academia, the Floyd-Thomases and Mark Toulouse, pas participant-observers, provide a riveting, rigorous, and reflective analysis of 'worshiping' at one of the seven popular altars of U.S. culture—a process they call "altar-ization." Regardless as to which 'secular' altar you bend your knees; this groundbreaking book will raise your consciousness to the meaning of your participation."

"Americans' search for ultimate meaning is alive and well, although it looks different than it has in the past. The Altars Where We Worship is an intelligent and intriguing exploration into the ways in which Americans are increasingly living in multiple religious worlds at once, where traditional religious altars have been replaced in people's hearts with altars created by popular cultural (e.g., business, entertainment, sex, technology, sports) altars no less demanding and meaning-full."

"Tillich meets Marx in this sweeping indictment of where Americans really go to find ultimate meaning—not to church but to sex, business, entertainment, politics, sports, and science and technology. Rejecting the idea that popular culture is devoid of religion, the authors argue instead that religion in America is deeply and pervasively self-indulgent."

▼▲
I'm the author/artist and I want to review The Altars Where We Worship: The Religious Significance of Popular Culture - eBook.
Back
Back