Altar Call: Inviting Response to the Gospel
By: Donna Schaper 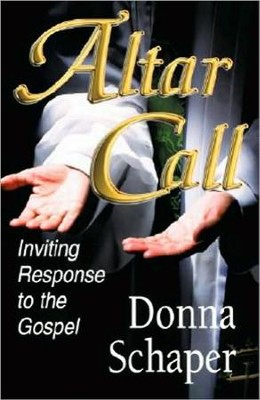 ▼▲
This volume will examine commitment in the context of the individual and institutinal response to God's call to be God's people. As the author explains, "The call from God is a call to the altar, to the holy, in a simple do-able way."

▼▲
This volume examines commitment in the context of the individual and institutional response to God 's call to be God 's people. The call from God is a call to the altar, to the holy, in a simple do-able way, explains the author. Right now we are a little like an aborted African chant in the mainline church; there is a call, but no response. Donna Schaper outlines various reasons for this disconnect between call and response, and she offers ten concrete ways of responding to the gospel through specific actions that will help persons reconnect with their commitment to be the people of God.

▼▲
Donna Schaper serves as Senior Minister at Judson Memorial Church in New York City. She has also served churches in Florida, Massachusetts, Pennsylvania, and Arizona. She is the principal in a consulting firm called Bricks Without Straw, which shows not-for-profits how to raise energy and money and capacity, and has been involved with a series of turn-around congregations and a host of social-action issues. In addition to serving as pastor, she has written several books. Donna lives in New York, New York.

▼▲
I'm the author/artist and I want to review Altar Call: Inviting Response to the Gospel.
Back
×