We are OPEN and SHIPPING - click here for shipping estimates
PRE-SUMMER CYBER SALE EXTENDED thru 6/1 ~ Over 2,500 items up to 90% off
We Have Also a More Sure Word of Prophecy 2 Peter 1: 19
By: William Bergsma 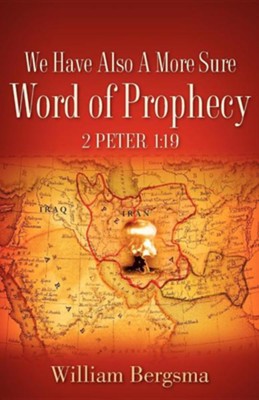 ▼▲
This book explores the Biblical prophecies concerning "the Last Days." It looks at scriptures about the rapture of the church, the time of tribulation, the anti-christ, Armageddon, and the return of the Lord Jesus Christ. It argues for a literal interpretation of the Bible, and opposes the Amillennialist view of the end times. It looks at the signs that Jesus said would indicate His coming is near, including the fact that Israel is again a nation. It is the author's conclusion that the Lord will return for His believers very soon. William Bergsma was born in the Netherlands in 1927. He immigrated to Canada in 1953 when he was 25 years old, with his mother and 5 siblings. He met Jenny, who would later become his wife, on board the ship to Canada. They settled in Ontario where they raised 3 children. In 1977 Bill and his wife moved to Nanaimo, British Columbia, where he is now enjoying his retirement. Bill was raised in the Christian faith. He has been a devout member of the Christian Reformed Church all of his life. In recent years he has become especially interested in end time prophesies, many of which had always been unclear in the CRC. He has a passion for the Word of God. Bill takes pleasure in a simple life with his wife and family. He is an avid gardener and finds inspiration in nature, long walks along the seashore being a favorite pastime. He is deeply concerned by the growing presence of evil in today's world.