Skip to main content
SPRING CYBER EVENT STARTS NOW: And it's a really BIG deal! Up to 88% off through 5/24>
Already Compromised: Christian colleges took a test on the state of their faith and The Final Exam Is In - eBook
By: Ken Ham, Dr. Greg Hall
Stock No: WW19808EB 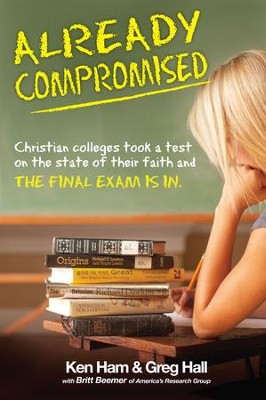 Already Compromised: Christian colleges took a test on the state of their faith and The Final Exam Is In - eBook

▼▲
An eye-opening look at the state of American higher education! Surveying Christian and secular schools, Ham and Hall examine whether Ivy League institutions continue to follow their foundational Christian beliefs, and determine which Christian colleges teach the inerrancy of Scripture. What organizations will build - or damage - your child's faith? The results will surprise you!

Will a Christian college build a student's faith or tear it down?

Parents and students sacrifice large sums of money for a Christian college education. Why? They are purchasing a guarantee their child's faith in God and the Bible will be guarded and developed. But is the Bible being taught? Will they graduate believing in the inerrancy of Scripture, the Flood of Noah's Day, and a literal six day creation?

Ken Ham is an accomplished author of some of the most popular and effective apologetics research on the market. He is the founder of Answers in Genesis - U.S. and the president of the Creation Museum.

I have no doubt that the average church member would be shocked and outraged to discover how many supposedly evangelical colleges and universities have more or less given up their commitment to biblical inerrancy and the authority of Scripture—especially when dealing with the early chapters of Genesis. I’m grateful for this important work by Ken Ham and Greg Hall, documenting the many compromises that have ravaged the Christian academy. Already Compromised is a much needed wake-up call and a summons to arms for faithful, courageous Bible believers. We need to stand up, declare our faith, and defend the truth of Scripture courageously. The stakes are high and the battle may be more fierce than ever, but God will bless those who honor His Word. May He bless us with clear, unwavering voices.
— John MacArthur

Dr. Greg Hall has served as President of Warner University since December of 1991.

Before coming to Warner University Dr. Hall was the Executive Director of the Church of God in Western Pennsylvania for 7 years. He also served 14 years as a pastor in the state of New York and Pennsylvania. He is a native of Jamestown, New York and is an ordained minister.

In 2002 Dr. Hall received a Certificate of Completion from The College of William & Mary Planned Giving Institute.

Dr. Hall has held several leadership positions in the community including President of the Lake Wales Chamber of Commerce and the Lake Wales Care Center. He has also served as a member of the Presidents Council for the Independent Colleges and Universities of Florida and the National Association of Intercollegiate Athletics.

Dr. Hall’s wife, Patt received both her Bachelor of Arts degree in Elementary Education and Master of Science in Early Childhood Development from the State University of New York. She is currently teaching at Babson Park Elementary. They have two grown children, Trevor and Courtney, both Warner University graduates.


Todd Hillard is a freelance writer from San Antonio, Texas, where he lives with his wife and five kids. A former youth pastor and missionary, he is passionate about taking the dreams and stories of others and bringing them to life on the written page. Todd received his BS in pre-med studies and psychology from the University of Utah and his MA in English from Arizona State University.

▼▲
I'm the author/artist and I want to review Already Compromised: Christian colleges took a test on the state of their faith and The Final Exam Is In - eBook.
Back