Skip to main content
OUR BIGGEST BARGAIN SALE EVER: Over 6,000 deals at never-seen-before prices ~ through 8/23. Shop now >
Alphabetical Index to the First Lines of All Stanzas of Poetry by John and Charles Wesley - eBook
By: S.T. Kimbrough Jr.
Stock No: WW108153EB 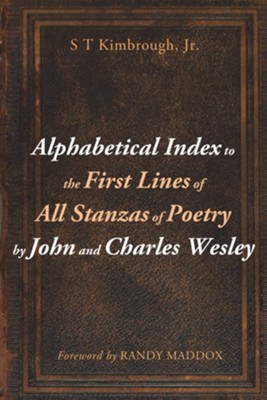 ▼▲
This is the first-ever index of the first line of every stanza of all the poems and hymns in the publications of John and Charles Wesley, as well as those of other authors included in their publications. Two sources have been used as the basis for the creation of the index: (1) George Osborn, The Poetical Works of John and Charles Wesley, thirteen volumes published between 1868 and 1872; (2) S T Kimbrough, Jr., Oliver A. Beckerlegge, The Unpublished Poetry of Charles Wesley, three volumes published in 1988, 1990, and 1992.   The index in volume 13 of Osborn's work was an attempt to produce a first-line index of all stanzas of the poems included in the thirteen-volume work. There were hundreds of omissions and occasional misspellings. Due to lack of space, first lines were often abbreviated, thus providing often only portions of first lines. In this index first lines of all poem stanzas are printed in full, omissions are included, and misspellings are corrected.   This index also provides a comparable index for all previously unpublished poems in the Kimbrough/Beckerlegge volumes. This is the first comprehensive and reliable index to Wesley poetry, which will assist interpreters with the full range of John and Charles Wesley's verse.

▼▲
I'm the author/artist and I want to review Alphabetical Index to the First Lines of All Stanzas of Poetry by John and Charles Wesley - eBook.
Back
Back