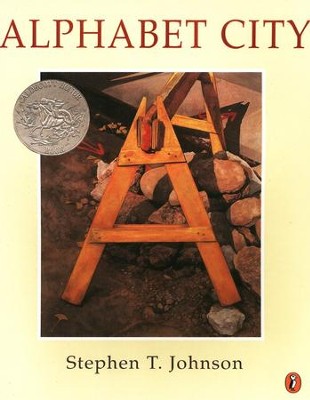 ▼▲
From the A of a construction sawhorse to the Z of a tenement fire escape, this truly unique alphabet book is guaranteed to satisfy the eye and the imagination. Using New York as an inspiration, Stephen Johnson has captured each letter of the alphabet as it occurs naturally in city surroundings. The artwork is stunningly realistic and the letters - some strikingly clear, others more elusive - will encourage readers young and old alike to look at the city in a whole new way. This sophisticated, wordless alphabet book is sure to appeal to young and old alike. Recommended for ages 1 and up. A 1996 Caldecott Honor book.

The urban landscape will never look the same again. As Stephen T. Johnson demonstrates in a series of strikingly realistic pastels and watercolors, a simple sawhorse can contain the letter "A"--while lampposts alongside a highway can form a row of elegant, soaring Ys. A 1996 Caldecott Honor book, this sophisticated, wordless alphabet book is sure to appeal to young and old alike.

▼▲
Stephen T. Johnson is a highly versatile American artist whose art spans a broad range of concepts, contexts and mediums including painting, collage, drawing, sculpture and installations and can be seen in museum and gallery exhibitions, public art commissions, and through his original award-winning children’s books.

▼▲
I'm the author/artist and I want to review Alphabet City.
Back
Back