Skip to main content
SPRING CYBER EVENT STARTS NOW: And it's a really BIG deal! Up to 88% off through 5/24>
Alone Yet Not Alone - eBook
By: Tracy Leininger Craven
Stock No: WW75985EB 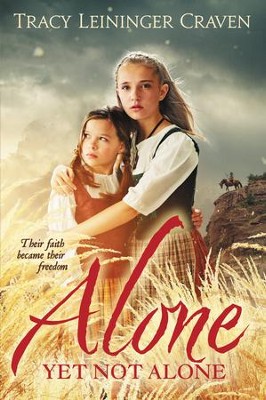 Alone Yet Not Alone - eBook

▼▲
A riveting novel based on the true-life experiences of Leininger's pioneer ancestors! In 1755 during the Penn's Creek Massacre in Pennsylvania, Allegheny warriors killed 14 colonists and captured 11 more---including the Leininger sisters. Their faith is strong, but will it continue to nurture them during their darkest hour?

Autumn of 1755 bestowed to the Leiningers’ world, not only its rich beauties, but also a rewarding harvest. On this particular day the whole valley seemed to rejoice in the fullness of the season—but suddenly Barbara and Regina’s peaceful frontier life is changed forever. General Braddock and his army had been defeated and soon the Pennsylvania settlers would suffer the bloody effects of the French and Indian War. On October 16, 1755, a band of Indians, led by Allegheny warriors, stormed through Buffalo Valley, burned the Leiningers’ log cabin, and captured the sisters. Few survived the Penn’s Creek Massacre and even fewer lived to tell the story. Regina makes a promise to her older sister just before they are unwillingly separated—each to endure different fates. Barbara is taken deep into the wilderness, but holds on to the hope that she will find her little sister. Though she is adopted into the Indian tribe, there is a longing deep inside that cannot be denied. She must escape—but the penalty if caught is certain death. No one expresses Barbara’s apprehensions better than her own words, written in 1759: "If one could not believe that there is a God, who helps and saves from death, one had better let running away alone...The extreme probability that the Indians would pursue and recapture us, was two to one compared with the dim hope that, perhaps, we would get through...even if we did escape the Indians, how would we ever succeed in passing through the wilderness, unacquainted with a single path or trail&hellip;"

Tracy Leininger Craven loves history and retelling real-life stories in her historical fiction books. She also loves spending her free time in the great outdoors with her husband David and their three children.

▼▲
I'm the author/artist and I want to review Alone Yet Not Alone - eBook.
Back
Back