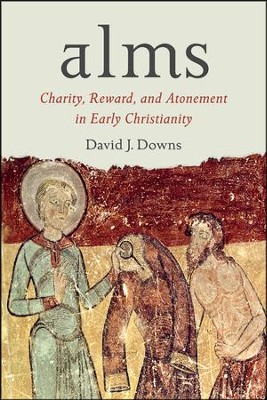 Christianity has often understood the death of Jesus on the cross as the sole means for forgiveness of sin. Despite this tradition, David Downs traces the early and sustained presence of yet another means by which Christians imagined atonement for sin: merciful care for the poor.

In Alms: Charity, Reward, and Atonement in Early Christianity, Downs begins by considering the economic context of almsgiving in the Greco-Roman world, a context in which the overwhelming reality of poverty cultivated the formation of relationships of reciprocity and solidarity. Downs then provides detailed examinations of almsgiving and the rewards associated with it in the Old Testament, Second Temple Judaism, and the New Testament. He then attends to early Christian texts and authors in which a theology of atoning almsgiving is developed— 2 Clement, the Didache, the Epistle of Barnabas, Polycarp, Clement of Alexandria, Origen, and Cyprian. In this historical and theological reconstruction, Downs outlines the emergence of a model for the atonement of sin in Christian literature of the first three centuries of the Common Era, namely, atoning almsgiving, or the notion that providing material assistance to the needy cleanses or covers sin.

Downs shows that early Christian advocacy of almsgiving’s atoning power is located in an ancient economic context in which fiscal and social relationships were deeply interconnected. Within this context, the concept of atoning almsgiving developed in large part as a result of nascent Christian engagement with scriptural traditions that present care for the poor as having the potential to secure future reward, including heavenly merit and even the cleansing of sin, for those who practice mercy. Downs thus reveals how sin and its solution were socially and ecclesiologically embodied, a vision that frequently contrasted with disregard for the social body, and the bodies of the poor, in Docetic and Gnostic Christianity.

Alms, in the end, illuminates the challenge of reading Scripture with the early church, for numerous patristic witnesses held together the conviction that salvation and atonement for sin come through the life, death, and resurrection of Jesus and the affirmation that the practice of mercifully caring for the needy cleanses or covers sin. Perhaps the ancient Christian integration of charity, reward, and atonement has the potential to reshape contemporary Christian traditions in which those spheres are separated.

Downs’ study allows one to grasp the theological implications of the practice of almsgiving.

Downs’ work is a great contribution to scholarship on almsgiving and atonement.

Recent years have seen a sharp rise in interest in the topic of almsgiving in Jewish and Christian traditions. Downs makes a contribution to this burgeoning discussion by tracing the character of atoning almsgiving as it emerged in the first two centuries of Christianity and by exploring how Christians correlated such a notion with an understanding of the atoning value of Christ’s death and resurrection…Readers interested in the topic of almsgiving in early Christianity will learn much from this volume.

A broad yet deep study of the atoning power of merciful action in ancient Judaism, the New Testament, and early Christianity, Alms is beautifully written and persuasively argued. Deposit this book in your library's treasury and generations of readers will be enriched.

This thorough examination of Jewish scriptural traditions, New Testament writings, and second- and third-century Christian authors reveals that believers had many theological incentives for performing merciful acts and giving to the poor.

▼▲
I'm the author/artist and I want to review Alms: Charity, Reward, and Atonement in Early Christianity.
Back