We are OPEN and SHIPPING - click here for shipping estimates
Almost Gone: Twenty-five Days, Three Friends, and One Chance to Save Our Daughter
By: John Baldwin 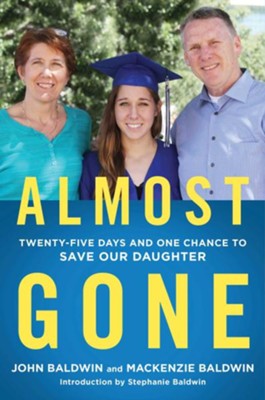 Almost Gone: Twenty-five Days, Three Friends, and One Chance to Save Our Daughter

▼▲
* John and Stephanie Baldwin were shocked when their Christian daughter, Mackenzie, suddenly expressed an interest in Islam. They had no idea that she planned to fly to Kosovo to marry a Muslim man she had met online. Would she be lost to her family forever? A riveting true story of faith and unconditional love! 256 pages, hardcover from Howard.

▼▲
This is the never-before-told, riveting true story about a teenage Christian girl who was seduced online by a charming young Muslim man from Kosovo, and her father who ultimately worked with the FBI to save her from disappearing forever.

The Baldwins were a strong Christian family, living in Plano, Texas. When their seventeen-year-old daughter, Mackenzie, met Aadam in a random-match online chat room, she fell for his good looks, his charm, and his respectful conversation. He told her he lived in New York, and they began an online friendship.

But over the course of a few months, Aadam revealed that he actually lived in Kosovo and had only pretended to live in New York so Mackenzie would keep chatting with him. The more attached she became to Aadam, the more detached she became from her family.

John and Stephanie, Mackenzie’s parents, had no clue what was behind their daughter’s change in personality, her surprising interest in Islam, her suddenly modest dress, and her withdrawal from friends and family. When Mackenzie’s attachment to Aadam increased even more and they became "engaged," she started making plans to secretly fly to Kosovo where she and Aadam would be married.

But twenty-five days before Mackenzie was scheduled to fly to Kosovo, John found out about his daughter’s dangerous plan when three of her friends came forward. John contacted the FBI, and asked for help. Though the FBI did not believe Aadam was trying to radicalize Mackenzie, they were concerned about his intentions, as that part of Kosovo was known for sex-trafficking, human-trafficking, and citizenship frauds. Kosovo was no place for an unaccompanied, naïve teenager to secretly travel and marry a stranger she knew only through online chats. Within the limited time remaining before Mackenzie’s departure, John and Stephanie had to confront Mackenzie and stop her before she would be lost to them forever.

Told from the viewpoint of both father and daughter, Almost Gone follows Mackenzie’s network of lies and deceit and her parents’ escalating bewilderment and alarm. More than a cautionary tale, this is the incredible story of unconditional parental love, unwavering faith, and how God helped a family save their daughter from a relationship that jeopardized not only her happiness, but also her safety.

▼▲
John Baldwin is a deacon and has served in many ministries at Parkway Hills Baptist Church in Plano, Texas. He also serves on the board of directors for High Adventure Treks for Dads and Daughters and Dads and Sons (HATS). This organization promotes father/daughter and father/son communication, leadership, and relationships through shared adventures such as white water kayaking, rock climbing, and other outdoor activities. By day, John is a business technology consultant working with the largest credit card banks.

Mackenzie Baldwin is a college student pursuing a double major in Psychology and Child Development. She is adventurous, enjoying activities such as rock climbing, camping, backpacking, and water sports. She is scuba certified and as a certified skydiver, she has made more than fifty solo jumps.


Stephanie Baldwin is very active at Parkway Hills Baptist Church, serving in the financial ministry to provide budget coaching and on the finance committee. She is involved in a women’s Bible Study group targeting the unchurched from the community. She is a CPA and has worked in the tax industry for more than thirty years.

▼▲
I'm the author/artist and I want to review Almost Gone: Twenty-five Days, Three Friends, and One Chance to Save Our Daughter.
Back
×