Skip to main content
SPRING CYBER EVENT STARTS NOW: And it's a really BIG deal! Up to 88% off through 5/24>
Almost Home: Helping Kids Move from Homelessness to Hope
By: Kevin Ryan, Tina Kelley
Stock No: WW230473 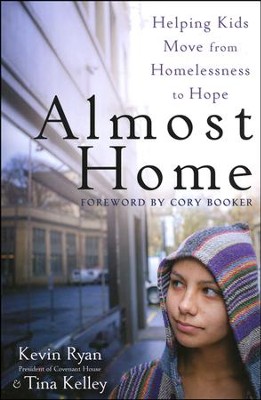 Almost Home tells the stories of six remarkable young people from across the United States and Canada as they confront life alone on the streets. Each eventually finds his or her way to Covenant House, the largest charity serving homeless and runaway youth in North America. From the son of a crack addict who fights his own descent into drug addiction to a teen mother reaching for a new life, their stories veer between devastating and inspiring as they each struggle to find a place called home.

Inviting us to get to know homeless teens as more than an accumulation of statistics and societal issues, this book gives a human face to a huge but largely invisible problem and offers practical insights into how to prevent homelessness and help homeless youth move to a hopeful future. For instance, one kid in the book goes on to become a college football player and counselor to at-risk adolescents and another becomes a state kickboxing champion. All the stories inspire us with victories of the human spirit, large and small. A portion of the proceeds from the sale of each book will help support kids who benefit from Covenant House's shelter and outreach services.

KEVIN RYAN is President of Covenant House International, which reaches 56,000 at-risk and street youth in more than twenty cities across six countries. Ryan is one of the country's most respected child advocates and his work has been covered by the New York Times and the Washington Post. He has appeared on Today, Good Morning America, 60 Minutes, Anderson Cooper 360, and other national media.

TINA KELLEY was a staff writer for the New York Times for ten years and shared in a Pulitzer Prize for the paper's coverage of the September 11 attacks. She wrote 121 "Portraits of Grief" profiles of the victims and is the author of two books of poetry, The Gospel of Galore and Precise.

▼▲
With narrative precision and journalistic detail, the heartbreaking trajectory from abandonment and abuse to teen homelessness is laid bare in this book by Covenant House president Ryan and staff member Kelley, a former New York Times reporter. Telling the story of six young people who came to a Covenant House, the nationwide network of faith-based homes for homeless and runaway youth, Ryan and Kelley uncover their dire circumstances as well as efforts by Covenant House staff, and the kids themselves, to get off the streets. In addition, the authors highlight such issues as human trafficking, the shortcomings of the foster care system, and the financial cost of not caring for homeless youth, as well as providing suggestions and resources for mentoring, helping teen parents, and supporting LGBTQ youth. The compassionately told stories of survival are almost miraculous: a young man who had been abandoned and abused by his adoptive parents proudly returns to Covenant House to cook and serve a gourmet meal; another, bearing physical scars, walks the halls as an at-risk coordinator for a high school; and in the epilogue, we learn that a young woman who had survived drug addiction and prostitution has been accepted to college to study juvenile justice. (Publishers Weekly, October 2012)

▼▲
I'm the author/artist and I want to review Almost Home: Helping Kids Move from Homelessness to Hope.
Back
Back