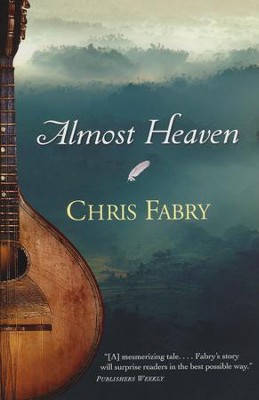 ▼▲
Billy Allman is a "hillbilly genius." Folks in town say he was born with a second helping of brains and a gift for playing the mandolin---and was cut short on social skills. But there are two things they don't know---he's troubled by a brutal secret, and an angel is determined to set things right! 400 pages, softcover from Tyndale.

▼▲
From the bestselling author of War Room comes a gripping novel that was awarded both an ECPA Christian Book Award for fiction and a 2011 Christy Award!
Billy Allman is a hillbilly genius. People in Dogwood, West Virginia, say he was born with a second helping of brains and a gift for playing the mandolin but was cut short on social skills. Though he’d gladly give you the shirt off his back, they were right. Billy longs to use his life as an ode to God, a lyrical, beautiful bluegrass song played with a finely tuned heart. So with spare parts from a lifetime of collecting, he builds a radio station in his own home. People in town laugh. But Billy carries a brutal secret that keeps him from significance and purpose. Things always seem to go wrong for him.

However small his life seems, from a different perspective Billy’s song reaches far beyond the hills and hollers he calls home. Malachi is an angel sent to observe Billy. Though it is not his dream assignment, Malachi follows the man and begins to see the bigger picture of how each painful step Billy takes is a note added to a beautiful symphony that will forever change the lives of those who hear it.

▼▲
Fabry (Dogwood; June Bug), who writes for children and adults, will certainly delight his ever enlarging fan base with this mesmerizing tale about a man whose gifts are clear to anyone interested in seeing past his obvious outer limitations. Billy Allman, gifted intellectually and especially skilled at playing the mandolin, lives his life as an offering to his divine creator. Billy epitomizes humility as he quietly works to build his own radio station with limited resources and against tremendous spiritual opposition. Day by day, year after year, Billy stays the course despite significant losses that follow him through life. Fabrys story will surprise readers in the best possible way; plot twists unfold and unexpected character transformations occur throughout this tender story of a single gentle soul who chooses to live by faith despite hardship, failure, and disappointment. (Oct.) Copyright 2010 Reed Business Information.

▼▲
A novel written by Christy award-winner Chris Fabry, Almost Heaven is based on the true story of musician and radio host, Billy Allman. No one expected anything good to come from Dogwood, West Virginia, and definitely not a bluegrass Christian radio station.

Life taught Billy to expect the worst. Alone as a young man, Billy now must deal with the death of his brother, his fathers suicide, and his mothers decline into insanity. Abused, manipulated and weary, he copes by burying his pain deep inside. Barely clinging to his faith, his only constant, Billy desperately tries to make something significant of his life. He pursues his dream of building a radio station that speaks to the hearts of people like him. But Billy must first wrestle with the buried guilt of his past before things finally can harmonize. Billys story is partly told by Michael, his guardian angel. Humans are a mystery to Michael, especially this seemingly insignificant one. As he compares Billys limited view of eternity to his own, Michael asks what it means genuinely and full-out to trust God.

I highly recommend Almost Heaven. Great for music lovers or non-musicians, all readers easily will connect with the characters and issues portrayed. Intellectually deep, Almost Heaven ponders the hard questions of life.  Estee B. Wells, www.ChristianBookPreviews.com

▼▲
I'm the author/artist and I want to review Almost Heaven.
Back
Back