Skip to main content
The Peace That Almost Was: The Forgotten Story of the 1861 Washington Peace Conference and the Final Attempt to Avert the Civil War - eBook
By: Mark Tooley
Stock No: WW74051EB 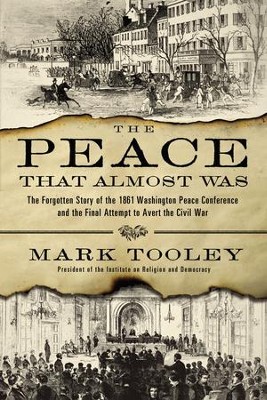 The Peace That Almost Was: The Forgotten Story of the 1861 Washington Peace Conference and the Final Attempt to Avert the Civil War - eBook

A narrative history of the 1861 Washington Peace Conference, the bipartisan, last-ditch effort to prevent the Civil War, an effort that nearly averted the carnage that followed.

In February 1861, most of America&AElig;s great statesmen&ugrave;including a former president, dozens of current and former senators, Supreme Court justices, governors, and congressmen&ugrave;came together at the historic Willard Hotel in a desperate attempt to stave off Civil War.

Seven southern states had already seceded, and the conferees battled against time to craft a compromise to protect slavery and thus preserve the union and prevent war. Participants included former President John Tyler, General William Sherman&AElig;s Catholic step-father, General Winfield Scott, and Lincoln&AElig;s future Treasury Secretary, Salmon Chase&ugrave;and from a room upstairs at the hotel, Lincoln himself. Revelatory and definitive, The Peace That Almost Was demonstrates that slavery was the main issue of the conference&ugrave;and thus of the war itself&ugrave;and that no matter the shared faith, family, and friendships of the participants, ultimately no compromise could be reached.

▼▲
I'm the author/artist and I want to review The Peace That Almost Was: The Forgotten Story of the 1861 Washington Peace Conference and the Final Attempt to Avert the Civil War - eBook.
Back
Back