Skip to main content
The Allure of Gentleness: Defending the Faith in the Manner of Jesus
By: Dallas Willard
Stock No: WW2114099 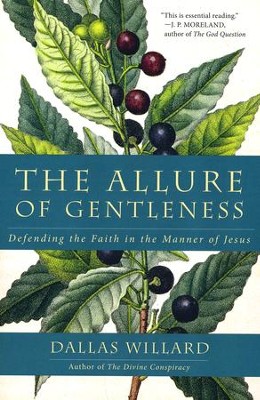 The Allure of Gentleness: Defending the Faith in the Manner of Jesus

When called upon to explain their faith, Christians do not always feel equipped to do so-particularly when some of the most difficult questions arise. In The Allure of Gentleness, esteemed teacher and author Dallas Willard not only assures us of the truth and reasonableness of the Christian faith, but also explores why reason and logic are not enough: to explain Jesus's message, we must also be like Jesus, characterized by love, humility, and gentleness.

Based on a series of talks and lectures on apologetics given by the late author and edited by his daughter, Becky Heatley, this book constitutes Dallas Willard's most thorough presentation on how to defend the Christian faith for the twenty-first century. This beautiful model of life, this allure of gentleness, Willard tells us, is the foundation for making the most compelling argument for Christ, one that will assure others that the Christian faith is not only true but the answer to our deepest desires and hopes.

The revered Christian author whose bestselling classics include The Divine Conspiracy and The Spirit of the Disciplines provides a new model for how we can present the Christian faith to others.

When Christians share their faith, they often appeal to reason, logic, and the truth of doctrine. But these tactics often are not effective. A better approach to spread Christ’s word, Dallas Willard suggests, is to use the example of our own lives. To demonstrate Jesus’s message, we must be transformed people living out a life reflective of Jesus himself, a life of love, humility, and gentleness.

This beautiful model of life—this allure of gentleness—Willard argues, is the foundation for making the most compelling argument for Christianity, one that will convince others that there is something special about Christianity and the Jesus we follow.

Dallas Willard was a professor at the University of Southern California's School of Philosophy until his death in 2013. His groundbreaking books The Divine Conspiracy, The Great Omission, Knowing Christ Today, Hearing God, The Spirit of the Disciplines, Renovation of the Heart, and The Divine Conspiracy Continued forever changed the way thousands of Christians experience their faith.

▼▲
“It was Willard’s habit to take an issue and cast it in a light that no one had ever thought of before; he does this here with key apologetical issues, and places apologetics against the backdrop of pastoral care. This is essential reading.”
“As an adult I discovered Dallas Willard. Unfailingly gentle and respectful, he transformed the apologetics of my generation as many of us ‘laid down our swords and shields.’”
“Dallas Willard was a true Master. Who else combined such profundity with such clarity and simplicity? Here, he addresses an issue that is both timely and urgent for Christian advocacy today. But it is also a genuine hallmark of his own gentle and humble character as a man and thinker.”
“Dallas Willard’s understanding of apologetics is revolutionary. It is at once more intellectually rigorous and yet more attainable and more humble and more tied to character than anything I have seen on the subject. What he describes is what Jesus actually did.”
“Following in the tradition of C.S. Lewis, Willard advocates for truth, born on the wings of grace, and does so in the manner of a fellow pilgrim, keen to listen and to share.”
“Classic Willard: the gifted Christian philosopher answering hard questions—the questions so many people have about God, hell, the problem of evil, the nature of freedom, and the wonder of Jesus—in an accessible style and with a gentle spirit.”
“Trust Dallas to give us apologetics for everyone in the manner of Jesus: desiring to serve not convince; discarding defensiveness and intellectual one-upping; respecting others as honest inquirers; answering questions we’ve secretly wondered about.”
“Willard discusses the experience of discipleship…. These themes are woven throughout… from a man who knew what kingdom living meant, and was himself a doubt-lifting testimony to the rightness of a life of faith. Those who miss Willard’s presence and teaching will likely take pleasure in Allure.”
“Erudite and respectable. Willard’s very humility is disarming. The Allure of Gentleness powerfully models what it’s arguing for.”
“Helps people wrestle with common doubts and answer some of the hard questions.”

▼▲
I'm the author/artist and I want to review The Allure of Gentleness: Defending the Faith in the Manner of Jesus.
Back
Back