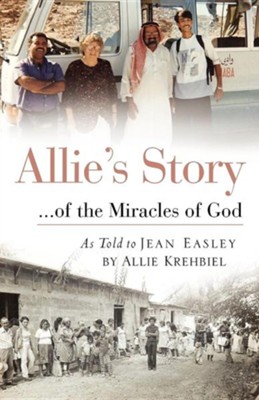 ▼▲
Allie's Story...of the Miracles of God is a biography of the life of one of God's bondservants, Allie Krehbiel. Allie's story has been 91 years in the making. She was raised in eastern Kentucky mining country and saved at an early age in a mainline church, but Allie really received transformation and began to serve God and preach the Gospel after the loss of her children. Her marriage was marred by physical abuse and grew out of control with the addition of ten children in a violent home. God brought her through, gave her victory, restored her family, and used her to preach the Gospel for almost 60 years. It is an amazing story of God's helping the helpless. Allie Krehbiel has been active in Christian ministry for almost six decades. She has taken the Gospel message to Israel, Mexico, Jordan, Egypt, Saudi Arabia, and also traveled to Russia, Austria, England, Italy, France, and Canada. She held breakfast prayer meetings in the King David's Hotel in Jerusalem. Mrs. Krehbiel pioneered and pastored churches in Michigan, Texas, and Mexico. She attended Beulah Heights Bible College in the 1950s in Atlanta, GA. She preached on a local TV station in the Rio Grande Valley, and worked on Trinity Broadcasting Network's prayer line in Harlingen, Texas. She was most recently credentialed by Anchor Bay, Maryville, Illinois. A Scripture favorite: "And they overcame him by the blood of the Lamb, and by the word of their testimony..." Rev. 12:11.

▼▲
I'm the author/artist and I want to review Allie's Story.
Back