Skip to main content
BIBLE SALE OF THE SEASON: For a Limited Time ~ Save on over 1,100 Bibles!
Allah's Fire, Task Force Valor Series #1
By: Gayle Roper, Chuck Holton
Stock No: WW524055 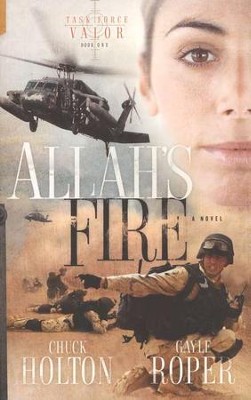 ▼▲
A suicide bomber blows up a hotel in Beirut. An American woman is kidnapped in Lebanon. Connected or coincidence? While Liz Fairchild searches for her sister, John Cooper tracks extremists who possess an undetectable weapon. When their paths intersect, more is at stake than a mission! Can John and Liz put aside their antagonism long enough to survive? 400 pages, softcover from Multnomah.

A suicide bomber blows up a hotel in Beirut, killing hundreds of people. A young American woman is kidnapped in Lebanon by terrorists. Connected or coincidence? Despite the government’s difficulty in locating her sister, Liz Fairchild, a reporter from the States, is determined to find her&hellip;regardless of the risks. Meanwhile, Sergeant John Cooper and his elite Special Ops team hunt down Palestinian extremists in possession of a new undetectable explosive that will change the "face of terror." When Liz and Task Force Valor’s paths intersect, more is at risk than their separate missions. While maneuvering through hostile territory, Liz and John realize they need each other to survive. Their antagonism gradually gives way to cooperation—and something more.

As the global war on terror heats up, the U.S. needs a team of highly trained special operators to deploy overseas to locate and neutralize threats, bringing EOD expertise to the dirty, deadly missions that have no room for error. For the men of Task Force Valor—life is a blast.

Master Sergeant John Cooper and his Special Ops team of explosives-hunters have a mission unlike any they’ve ever experienced before. A new undetectable type of explosive has burst onto the scene, and it will change the "face of terror" in the world. Washington wants the manufacturers shut down before it turns up on American soil.

A suicide bomber blows up a hotel in Beirut. Liz Fairchild, an American reporter, searches for her sister, Julie, who is presumed dead in the blast&hellip;until Liz uncovers evidence she might be alive. When signs indicate that time is running out for Julie, Liz is determined to find her—regardless of the risks.

As their separate objectives bring John and Liz together, the path ahead takes twists neither of them counted on. Although God works in all things for the good of those who love Him, God’s definition of good might not match theirs. When the mission goes south and politics intrude on their plans, the team must rely on their wits—and guts—to survive. Can they make it&hellip;with a wounded team member and a female civilian in tow?

"I met Chuck Holton a few years ago when he took my fiction classes at the Mount Hermon Christian Writers Conference. I enjoyed him because my life experience is so different from his. When it was time to develop a new fiction series, I thought it would be fun to combine his military background with my civilian background and write a series right out of today’s headlines. He has basically written the male points of view, and I’ve done the female. Very challenging and great fun!"

Gayle Roper has always been a story lover and has written more than thirty-five books. She has received numerous awards, and her articles have appeared in a number of periodicals including Discipleship Journal and Moody magazine. She enjoys speaking at writers’ conferences and women’s events, reading, and eating out. She adores her kids and grandkids and loves her own personal patron of the arts, her husband, Chuck (Roper, not Holton).

Chuck Holton is originally from Carson City, Nevada. He joined the army upon graduation from high school and served four years as an Airborne Ranger. After completing his enlistment, he moved to Wisconsin to go to college and fly helicopters for the National Guard. With his wife, Connie, he lives in West Virginia, where he now writes and speaks full time, and enjoys working around their farm and raising their six children.

▼▲
I'm the author/artist and I want to review Allah's Fire, Task Force Valor Series #1.
Back
Back