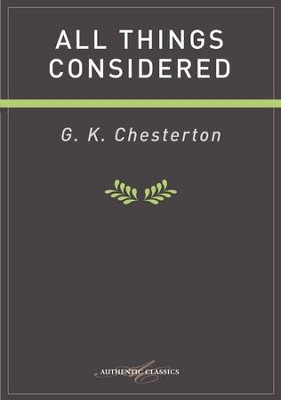 ▼▲
This book brings together a diverse selection of newspaper essays by celebrated author G K Chesterton (1874-1936), written before World War I. This is a sampling of Chesterton at his brilliant best, tackling politics, literature, the ups and downs of daily life, and much more - all of it displaying his robust "uncommon sense", his lively intellect, and his profound Christian faith.

▼▲
Gilbert Keith Chesterton was born in London, England, in 1874. He went on to study art at the Slade School, and literature at University College in London. Chesterton wrote a great deal of poetry, as well as works of social and literary criticism. Among his most notable books are The Man Who Was Thursday, a metaphysical thriller, and The Everlasting Man, a history of humankind's spiritual progress. After Chesterton converted to Catholicism in 1922, he wrote mainly on religious topics such as Orthodoxy and Heretics. Chesterton is most known for creating the famous priest-detective character Father Brown, who first appeared in The Innocence of Father Brown. Chesterton died in 1936 at the age of 62.

▼▲
I'm the author/artist and I want to review All Things Considered - eBook.
Back
Back