Skip to main content
SPRING CYBER EVENT STARTS NOW: And it's a really BIG deal! Up to 88% off through 5/24>
All Things Bright and Beautiful
By: Cecil Frances Alexander
Illustrated By: Bruce Whatley
Stock No: WW266170 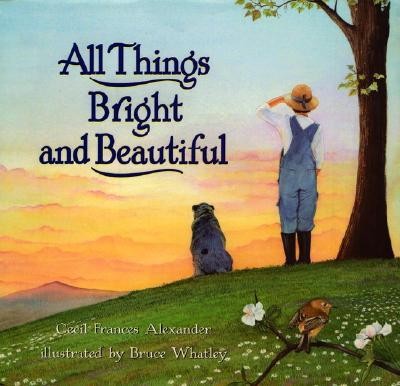 All Things Bright and Beautiful

All Things Bright and Beautiful is one of the most beloved hymns ever written.

Cecil Frances Alexander's timeless ode to nature calls everyone to celebrate the wonders of life, great and small, seen and unseen. Now Bruce Whatley offers a fresh interpretation of this classic for the whole family to enjoy. Through his lush paintings, we join a little girl's country ramble and share her appreciation of the beauty around her: a flower, the wind, a mountain view, all gives her reasons to pause and praise, and inspire us to do the same.

Cecil Frances Alexander was born in Ireland. She began writing poetry as a child and wrote nearly 400 hymns. She wrote All things Bright and Beautiful, one of her most popular, to help explain to children the opening words of the Apostles' Creed, a Christian statement of belief. The wife of an archbishop, she was known to be a generous woman who cared for the poor and opened a school for the deaf with her sister.

Bruce Whatley  is one of Australia's most highly regarded and talented authors and illustrators for children, both here and internationally. Bruce started his working life in advertising as an art director and illustrator and since then he has created over 60 picture books.  Many of his books have won awards both in Australia and overseas, including The Ugliest Dog in the World, Looking for Crabs, Tails from Grandad’s Attic and Detective Donut and the Wild Goose Chase.

In 2002 Bruce paired with author Jackie French and illustrated Diary of a Wombat – an iconic picture book that has become an international best-seller with foreign sales to nine territories.  Diary of Wombat was the start of an extraordinary artistic collaboration that sparked the publication of Pete the Sheep, Josephine Wants to Dance, Shaggy Gully Times, Baby Wombat’s Week, Christmas Wombat and Wombat Goes to School. Plus two delightful books about Queen Victoria, being Queen Victoria’s Underpants and Queen Victoria’s Christmas.

One of the most remarkable aspects of Bruce’s talent is the breadth of his artistic ability, which includes an appealing cartoon style to realistic representations using mediums ranging from coloured pencils, watercolour, acrylic and oils, and more recently, 3D digital software.

And accompanying that talent is an intellectual depth and curiosity that sees Bruce taking on large and complex projects, such as The Beach They Called Gallipoli, which is being co-created with Jackie French and will be published in 2014 to coincide with the centenary of WW1.

In 2008 Bruce completed his PhD titled Left Hand Right Hand: implications of ambidextrous image making. In his thesis Bruce looked at the image making of the non-dominant hand, making the fascinating discovery that in most people the ability to draw lies in the use of the ‘other’ hand.

▼▲
I'm the author/artist and I want to review All Things Bright and Beautiful.
Back