Skip to main content
All the Tea in China - eBook
By: Jane Orcutt
Stock No: WW10038EB 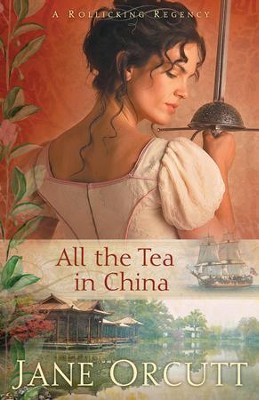 All the Tea in China - eBook

▼▲
Everybody expects Isabella to get married, but the witty, fun-loving Englishwoman shocks them all by announcing that she's going to become a missionary in the Far East. Leaving her predictable Oxford life behind, she sets sail to a world fraught with danger. Can she trust her fellow missionary Phineas? Or will her adventure end before it ever begins?

▼▲
The good young Englishwoman knows that her destiny depends upon a good marriage match. But Isabella Goodrich is not your typical good young Englishwoman. After an encounter with those less fortunate than she, witty and fun-loving Isabella makes a shocking decision. Against everyone's advice and wishes, she is going to become a missionary in the Far East.

Fighting against cultural expectations, common sense, and a mentor who is not as he seems, Isabella leaves her predictable Oxford life behind and sets sail to a new world fraught with danger. Can she trust the mysterious missionary Phineas Snowe? Or will her adventure end before it even begins? This first novel in the Rollicking Regency series will delight readers who like high adventure, twisting plots, and a fun bit of romance.

▼▲
Jane Orcutt is the author or coauthor of twelve books, including the bestselling Porch Swings and Picket Fences. She lives in the Fort Worth, Texas, area with her family.

▼▲
Jane Orcutt was the author or coauthor of fifteen books, including the bestselling Porch Swings and Picket Fences. A two-time RITA award finalist, Jane was also a finalist for the Romantic Times Reviewer's Choice Award.

"On Sunday, March 18, 2007, after a long battle with acute myeloid leukemia, Jane stepped into the arms of her Savior. She now rests safely in His arms, while her powerful legacy lives on through her family and through her books."

▼▲
I take pen in resolute hand to assure you that what I am about to recount is the truth, not the least of which involves heartbreak, joy, a Chinese translation of the Gospel According to St. Luke, and, oh, yes, a rather large sword. So begins Jane Orcutts most recent novel, All the Tea in China, narrated by its lively heroine Isabella Goodrichor, as shed rather be called, Bella.
Intelligent, educated, orphaned, and proficient with a sword, Bella does not see herself getting married like any proper girl of her era, in spite of her friends best efforts to match her. One of these unsuccessful matches is Phineas Snowe, a missionary to China who is in England to raise money for his mission work. Bella is not drawn to him as a potential match, but his fire for the unsaved in China inspires her. Instead of being a useless spinster in England, she will join Phineas in China as a missionary. Her idea meets with the disapproval both of her Uncle Toby and of Phineas, so Bella stows away on the ship bound for China. Once she is discovered by a most frustrated Phineas, reality sets in: she is bound for China and there is no turning back. But Bella persists, even when it becomes clear that not all thingsor all peopleare as they seem.
All the Tea In China is one of the more innovative books Ive read in a while. Orcutts use of first-person narration plunges the reader right into Bellas world. The style can be a little overblown at times, but it fits the vivid Regency setting, and it is well balanced by tasteful humor. The writing overall is fluid and natural, and informs about unfamiliar period and shipboard terms without being clumsy.
Orcutt also creates two original and enchanting characters in Bella and Phineas. Both of them are appropriate to their era and culture yet are also accessible to modern readers. Bella thankfully does not suffer from the usual feisty heroine syndrome: she is unique, knows it, and cares enough to make it clear that she actually belongs in the Regency period.
The plot of All the Tea in China starts in the seemingly too-predictable pattern: woman meets man, woman and man cant get along, sparks fly. But then Orcutt takes readers for a plot twist as dramatic as a storm at sea, and the entire direction of the book changes. The dialogue fencing between Bella and Phineas is excellent and realistic. The conflict begins early, and it continues all the way through the book. Christianity plays a prominent role in this novel. Bellas faith motivates her to leave England to become a missionary to China, and she relies on this faith to get through the difficulties that come in the pursuit of her goal. Phineas also portrays a realistic faith, with conflicts between beliefs, culture, and personal desires.
All the Tea in China is a wonderful book. Jane Orcutts characters are inventive, her plot is artfully strung, the writing is excellent, the historical research is solid, and, of course, there is that rather large sword. Its a book truly worth all the tea in China.  Rachel Niehaus, Christian Book Previews.com

▼▲
I'm the author/artist and I want to review All the Tea in China - eBook.
Back
Back