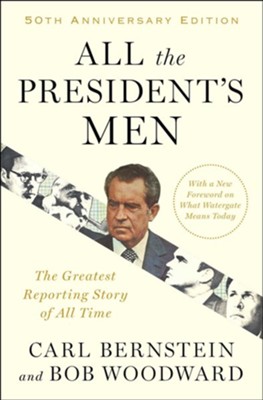 All the President's Men - eBook

▼▲
The most devastating political detective story of the century: the inside account of the two Washington Post reporters who broke the Watergate scandal, now with a 40th anniversary Afterword on the legacies of Watergate and Richard Nixon.

This is the book that changed America. Published just months before President Nixon’s resignation, All the President’s Men revealed the full scope of the scandal and introduced for the first time the mysterious “Deep Throat.” Beginning with the story of a simple burglary at Democratic headquarters and then continuing through headline after headline, Bernstein and Woodward deliver a riveting firsthand account of their reporting. Their explosive reports won a Pulitzer Prize for The Washington Post, toppled the president, and have since inspired generations of reporters.

All the President’s Men is a riveting detective story, capturing the exhilarating rush of the biggest presidential scandal in US history as it unfolded in real time. It is, as Time magazine wrote in their All-Time 100 Best Nonfiction Books list, “the work that brought down a presidency...perhaps the most influential piece of journalism in history.”

▼▲
Bob Woodward is an associate editor at The Washington Post, where he has worked for forty-four years. He has shared in two Pulitzer Prizes, first for The Washington Post’s coverage of the Watergate scandal, and later for coverage of the 9/11 terrorist attacks. He has authored or coauthored twelve #1 national nonfiction bestsellers. He has two daughters, Tali and Diana, and lives in Washington, DC, with his wife, writer Elsa Walsh. Carl Bernstein is a contributing editor for Vanity Fair magazine and has written for a variety of publications. He is the author of Loyalties: A Son’s Memoir, and has coauthored His Holiness: John Paul II and the History of Our Time with Marco Politi, as well as All the President's Men and The Final Days with Bob Woodward.

▼▲
"The work that brought down a presidency . . . perhaps the most influential piece of journalism in history."
"Maybe the single greatest reporting effort of all time."
"One of the greatest detective stories ever told."
"A fast-moving mystery, a whodunit written with ease. . . . A remarkable book."
"An authentic thriller."
"Much more than a 'hot book.' It is splendid reading . . . of enormous value. . . . A very human story."

▼▲
I'm the author/artist and I want to review All the President's Men - eBook.
Back
Back