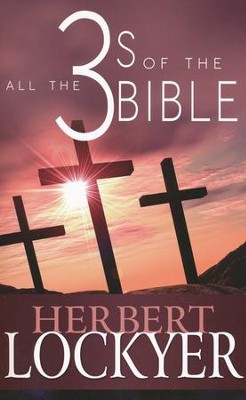 All The 3s Of The Bible

▼▲
In All the 3s of the Bible acclaimed Bible teacher Dr. Herbert Lockyer provides an exhaustive study of the number three throughout Scripture.

A great resource for pastors, Bible study and youth group leaders, Sunday school instructors, and for any believer who desires to delve deeper into Scripture this study is in-depth but accessible. You'll be amazed at the spiritual truths that can be unpacked by the biblical meanings of a simple number.Topics Included

▼▲
Dr. Herbert Lockyer (1886–1984) considered becoming an actor when he was first deciding on a career. Tall and well-spoken, he seemed a natural for the theater. But the Lord had something better in mind. Instead of the stage, God called Herbert to the pulpit, where, as a pastor, a Bible teacher, and the author of more than fifty books, he touched the hearts and lives of millions of people.
Dr. Lockyer held pastorates in Scotland and England for twenty-five years. As pastor of Leeds Road Baptist Church in Bradford, England, he became a leader in the Keswick Higher Life Movement, which emphasized the significance of living in the fullness of the Holy Spirit. This led to an invitation to speak at the Moody Bible Institute’s fiftieth anniversary in 1936. His warm reception at that event led to his ministry in the United States. He received honorary degrees from both the Northwestern Evangelical Seminary and the International Academy in London.
In 1955, he returned to England, where he lived for many years. He then returned to the United States, where he spent the final years of his life in Colorado Springs, Colorado, with his son, the Rev. Herbert Lockyer Jr., a Presbyterian minister who eventually became his editor.