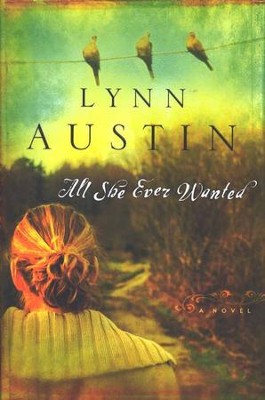 All She Ever Wanted

▼▲
From the Christy Award-winning author of Hidden Places comes a heart-tugging tale of multi-generational secrets, forgiveness, and reconciliation! Kathleen severed family ties 35 years ago---just as her mother, Eleanor, and grandmother, Fiona, had before her. Can she swallow her pride now and learn from their stories before the pattern repeats in a fourth generation? 400 pages, softcover from Bethany.

▼▲
All She Ever Wanted is the emotion-packed story of three generations of women: Kathleen, her mother, Eleanor, and her grandmother, Fiona. Each woman left home to escape her family's past and to start a new life. Kathleen has been estranged from her family for 35 years, and she is torn between the need to forgive and the urge to forget. Hoping to find answers that will patch the wounds of her tattered heart and salvage her relationship with her daughter, Kathleen embarks on a journey into her family's mysterious past.

▼▲
Lynn Austin is a former teacher who now writes and speaks full time. She has won three Christy Awards for her historical novels Candle in the Darkness, Fire by Night, and Hidden Places. She and her husband have three children and make their home near Chicago, Illinois.

▼▲
All She Ever Wanted by Lynn Austin is a well-written book about relationships and the necessity of forgiveness. As Kathleen Seymour discovers the truth about the pasts of her mother and grandmother, she and her daughter Joelle begin to mend their torn relationship. Kathleen learns that when hard times occur, running away from them is not the best answer.

As Kathleen begins the repair with Joelle, she is prompted to revisit Riverside, the hometown she hasnt returned to in thirty-five years. During the long drive, Kathleen reveals to Joelle the childhood she tried so hard to forget. When they arrive in Riverside, Kathleen uncovers the difficult lives her mother and her grandmother had as young women, and she begins to understand the cause of her detested past. Kathleen realizes the importance of forgiving others just as she has been forgiven for her mistakes.

All She Ever Wanted gives the story of three generations of underprivileged women who want nothing more than wealth and love, but who look for them in all the wrong places. Lynn Austin does a wonderful job of making her characters realistic. As Kathleen tells her daughter about her past and learns about her mothers and grandmothers experiences, the readers are left feeling sympathy for them all, as though they are watching the events unfold before their own eyes. The imperfect characters with imperfect lives make it easy for the readers to relate to them and allow the truth behind the story to be revealed: love and forgiveness can always be found in God.

In All She Ever Wanted, the stories of the daughter, mother, and grandmother combine to make a brilliant novel about love, forgiveness, suffering, and the importance of resisting the temptation to run away when things get tough. A bit of mystery is added to the plot to make it even more enjoyable. Not only is this book great entertainment, it also benefits the reader spiritually. The stories of these women reveal the need to trust in Jesus throughout life. This novel is perfect for women who have seen hard times and for mothers and daughters, especially those who struggle in their relationships together, but I recommend it to anyone. -- Andrea Burns, Christian Book Previews.com

▼▲
I'm the author/artist and I want to review All She Ever Wanted.
Back
Back