Skip to main content
SPRING CYBER EVENT STARTS NOW: And it's a really BIG deal! Up to 88% off through 5/24>
All Shall Be Well
Edited By: Gregory MacDonald, Robin A. Parry
Stock No: WW086850 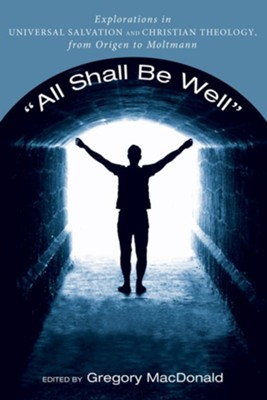 All Shall Be Well

▼▲
Description: ""All shall be well, and all shall be well, and all manner of thing shall be well."" Lady Julian of Norwich Universalism runs like a slender thread through the history of Christian theology. It has always been a minority report and has often been regarded as heresy, but it has proven to be a surprisingly resilient ""idea."" Over the centuries Christian universalism, in one form or another, has been reinvented time and time again. In this book an international team of scholars explore the diverse universalisms of Christian thinkers from the Origen to Moltmann. In the introduction Gregory MacDonald argues that theologies of universal salvation occupy a space between heresy and dogma. Therefore disagreements about whether all will be saved should not be thought of as debates between ""the orthodox"" and ""heretics"" but rather as ""in-house"" debates between Christians. The studies that follow aim, in the first instance, to hear, understand, and explain the eschatological claims of a range of Christians from the third to the twenty-first centuries. They also offer some constructive, critical engagement with those claims. Origen (Tom Greggs) Gregory of Nyssa (Steve Harmon) Julian of Norwich (Robert Sweetman) The Cambridge Platonists (Louise Hickman) James Relly (Wayne K. Clymer) Elhanan Winchester (Robin Parry) Friedrich Schleiermacher (Murray Rae) Thomas Erskine (Don Horrocks) George MacDonald (Thomas Talbott) P. T. Forsyth (Jason Goroncy) Sergius Bulgakov (Paul Gavrilyuk) Karl Barth (Oliver Crisp) Jaques Ellul (Andrew Goddard) J. A. T. Robinson (Trevor Hart) Hans Urs von Balthasar (Edward T. Oakes, SJ) John Hick (Lindsay Hall) J rgen Moltmann (Nik Ansell) Endorsements: ""This is a lively and illuminating collection of essays. Its well-judged blend of theological analysis and historical context makes it accessible to the general reader as well as raising provocative questions for theologians about the place of universalism in Christian tradition. I will certainly use it in my teaching."" --Morwenna Ludlow Lecturer in Patristics, University of Exeter, UK ""Is universalism the heart of the gospel or an idea concocted by the 'devil' to desensitize human beings to the possibility of eternal damnation? The stakes could not be higher This volume shows why many of the great theologians in the Christian tradition responded positively to the former question even as their engaging the arguments back-and-forth will equip readers to formulate their own answers to the latter and other associated rationales rejecting the universalist notion. For all booklovers, the riveting theological biographies in chapter after chapter will keep readers tuned in from start to finish to follow the twists and turns that have perennially characterized the quest to understand universal salvation and its implications."" --Amos Yong J. Rodman Williams Professor of Theology, Regent University, Virginia Beach About the Contributor(s): Gregory MacDonald is Robin Parry, an Acquisitions Editor with Wipf and Stock.

▼▲
I'm the author/artist and I want to review All Shall Be Well.
Back