Skip to main content
All Sail Set
By: Armstrong Sperry
Stock No: WW9235233 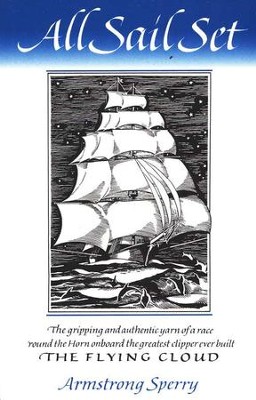 ▼▲
In the golden age of clipper ships, the Flying Cloud is one of the grandest. She is the heroine of this story of a boy's start at sea. Enoch Thacher, who tells the story in his old age, is the son of a worthy merchant who had lost his fortune when Empress of Asia went down with all hands off Cape Horn. To help his mother, Enoch goes to Donald McKay, who knew his father, and takes a position in the drafting room in McKay's yard while Flying Cloud is on the stocks. His love for ships and the sea has been fostered by his old friend, Messina Clarke, a shellback of the old school, who looked with distrust upon McKay's long, concave clipper bows, even when the ships made record passages. Enoch becomes a devoted worshiper of McKay, and the dream of his life is to go to sea. At fifteen his vocation is plain before him. He has learned every rope and spar in the shipyard. He has seen Flying Cloud go out in ballast to load in New York for San Francisco and China. To his joy, Donald McKay recommends him for a cadetship and wins over his widowed mother to consent. Accompanied by Sperry's wonderfully vigorous drawings, this realistic, riveting narrative of iron men and wooden ships will keep even landlubbers pegged to their seats. Recommended for ages 9 and up. A 1936 Newbery Honor book.

▼▲
I'm the author/artist and I want to review All Sail Set.
Back
Back