Skip to main content
All Rivers Run to the Sea: Memoirs
By: Elie Wiesel
Stock No: WW10288 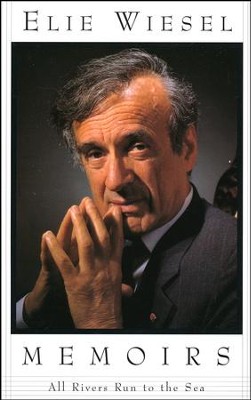 All Rivers Run to the Sea: Memoirs

▼▲
In this first volume of Elie Wiesel's projected two volume autobiography, the Nobel Laureate takes us from childhood memories of a traditional and loving Jewish family in a Carpathian village through the horrors of Auschwitz and Buchenwald and the years of spiritual struggle to his emergence as a witness for Israel and for the Holocaust's martyrs and survivors, and as spokesman for humanity. Softcover.

In this first volume of his two-volume autobiography, Wiesel takes us from his childhood memories of a traditional and loving Jewish family in the Romanian village of Sighet through the horrors of Auschwitz and Buchenwald and the years of spiritual struggle, to his emergence as a witness for the Holocaust's martyrs and survivors and for the State of Israel, and as a spokesman for humanity.  With 16 pages of black-and-white photographs.

"From the abyss of the death camps Wiesel has come as a messenger to mankind—not with a message of hate and revenge, but with one of brotherhood and atonement."
—From the citation for the 1986 Nobel Peace Prize

▼▲
ELIE WIESEL was awarded the Nobel Peace Prize in 1986. The author of more than fifty internationally acclaimed works of fiction and nonfiction, he was Andrew W. Mellon Professor in the Humanities and University Professor at Boston University for forty years. Wiesel died in 2016.

▼▲
"This is Elie Wiesel at his best, a highly revealing self-portrait of the man behind the world-famed persona."
—Herman Woulk

"A biblical-like epic of a great man who has turned genocidal tragedy into a life force for world peace. I should be required reading for membership in the human race."
—Alan M. Dershowitz

"Immensely moving [and[ unforgettable, [with] the searing intensity of his novels and autobiographical tales . . . Will make you cry, yet somehow leaves you renewed, with a cautious hope for humanity's future."
—Publishers Weekly

"Wiesel remains unequaled at bringing home the experience of horrific, nullifying disorientation that was the first step in the program of genocide known as the Final Solution."
—Daphne Merkin, The New York Times Book Review

"Part of the delight of All Rivers lies in witnessing the gradual transformation of the brokenhearted, orphaned young boy into the spirited journalist who longs to embrace the world at large, and who, in time, does.&Prime;
—Rebecca Goldstein, Newsday

"For all those who have never known Elie Wiesel, these memoirs are an introduction to the man, and for many who have met him, there will be discoveries and realizations.&Prime;
—Raul Hilberg, Boston Globe

▼▲
I'm the author/artist and I want to review All Rivers Run to the Sea: Memoirs.
Back
Back