Skip to main content
All I'll Ever Need - eBook
By: Harry Kraus M.D.
Stock No: WW3664EB 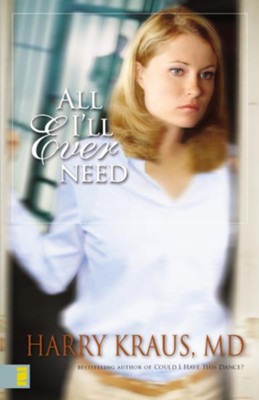 All I'll Ever Need - eBook

▼▲
After a near rape, Dr. Claire McCall is in counseling when she uncovers a shattering truth. Then her assailant escapes from jail, she's accused of euthanizing a terminally ill patient, and another death shakes her world to its core! Can it all be coincidental---or is there something more sinister behind it?

▼▲
The grueling past months finally seem about to blossom into a happy future together for Dr. Claire McCall and her fiancé, John Cerelli. But their wedding plans are interrupted by circumstances so devastating they threaten everything Claire holds dear: her medical career, her relationship with John, and quite possibly her freedom.Working through the turmoil caused by a near rape, Claire has sought a counselor to help her untangle her emotions. What the counselor uncovers is shattering, but things are about to get worse. The man who assaulted her escapes from jail—and then, to top it off, Claire is accused of euthanizing a terminally ill patient.But the next death is the one that could shake Claire’s world to its foundation.How can so much be happening so fast—unless someone is choreographing this lethal nightmare? In this exciting sequel to Could I Have This Dance? and For the Rest of My Life, nothing may be as it seems. Not the present. And not the past.

▼▲
Harry Lee Kraus, MD, (www.cuttingedgefiction.com) is the bestselling author of ten books, including Could I Have This Dance? For the Rest of My Life, and All I’ll Ever Need. He draws from his career as a board-certified general surgeon to flavor his writing with exceptional authenticity and technical knowledge. He and his wife, Kris, are missionaries serving in East Africa.

▼▲
Harry Lee Kraus, MD, is the bestselling author of ten books, including Could I Have This Dance? For the Rest of My Life, and All Ill Ever Need. He draws from his career as a board-certified general surgeon to flavor his writing with exceptional authenticity and technical knowledge. He and his wife, Kris, are missionaries serving in East Africa.

▼▲
Dr. Claire McCalls life should be settling down. After all, rapist Tyler Crutchfield is awaiting trial in jail. Although Claires genetic testing shows that she carries Huntington Disease, John Cerelli, has asked her to marry him. Her practice is going well. Why, then, do nightmares awaken her, keeping her so terrified that she sleeps with a loaded pistol at her side in All Ill Ever Need?

As nightmares plague her and drive a wedge between her and John, she suspects that her father may have molested her during one of his drunken sprees. Her sessions with therapist, Joanne Phillips, make her wonder if she should confront her father who is dying of Huntingtons. One of the few things hes been able to do is request help in dying. John has other problems as his co-worker, Ami Grandle, becomes obsessed with him. She refuses to accept his engagement to Claire, and John does not know how to deal with the beautiful young woman. When Ami files a complaint with the medical board accusing Claire of euthanizing her stepfather and then rigs a situation at work to look as if John has assaulted her, John nearly loses Claire. Tyler Crutchfields escape from prison endangers Claire and her whole family. He promises to come back to finish what he had started in For the Rest of My Life.

Harry Krauss expertise as a doctor comes across in this medical thriller, All Ill Ever Need. However, its his skill as a writer that gives the story such force. Kraus skillfully piles one problem on top of another for Claire and John, until the reader wonders how Claire can stand one more problem. For that matter, can the reader stand one more problem? During the ordeal, Claire continually returns to verses on trust, such as Isaiah 64:8, to remind herself that she is the clay and God is the potter, and that she can trust Him.

Drawing us deeply into the lives of his characters, Kraus pulls the plotlines together to form a powerful story about learning to trust when all around us falls apart.  Debbie W. Wilson, Christian Book Previews.com

▼▲
I'm the author/artist and I want to review All I'll Ever Need - eBook.
Back
Back