We are OPEN and SHIPPING - click here for shipping estimates
PRE-SUMMER CYBER SALE EXTENDED thru 6/1 ~ Over 2,500 items up to 90% off
All Hallows' Eve: A Novel - eBook
By: Charles Williams 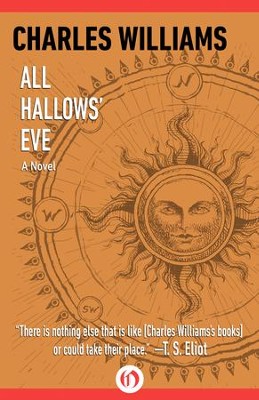 All Hallows' Eve: A Novel - eBook

▼▲
In post-Blitz London, humanity’s last hope of defeating a powerful magician’s insidious plans lies with a ghost trapped in a surreal city of the dead

During World War II, soon after Ms. Lester Furnival married her beloved Richard, she died in an accident. Now she wanders the dark and lonely streets with her friend Evelyn. An empty mirror image of the London she once knew, the city is a place where time has lost its rules and structure, and where Lester can catch heartbreaking glimpses of the world she left behind.

But all is not well in the realm of the living. The other London has fallen under the sway of the magus Simon Leclerc, a master of black magic and necromancy who would sacrifice the soul of his own daughter in the pursuit of ultimate power. With her widowed husband entangled in the sorcerer’s toxic web along with an enigmatic artist who can paint only the truth, Lester must somehow thwart Leclerc’s malevolent plan if she is to find salvation—for the evil necromancer desires nothing less than total dominion over both worlds.

A ghost story unlike any other, All Hallows’ Eve is the final novel by the remarkable Charles Williams, whose brilliant literary excursions into the spiritual and supernatural realms remain unsurpassed more than six decades after his death. Williams was arguably the most creatively daring and ambitious of Oxford’s famed Inklings, the literary society that included such notables as C. S. Lewis, J. R. R. Tolkien, and Owen Barfield, and his chilling, breathtaking, and deeply felt fiction remains the gold standard for provocative and intelligent contemporary fantasy.

▼▲
Charles Williams (1886–1945) was a British author and longtime editor at Oxford University Press. He was one of the three most prominent members of the literary group known as the Inklings—the other two being C. S. Lewis and J. R. R. Tolkien. Williams wrote poetry, drama, biography, literary criticism, and more, but is best known for his novels, which explored the primal conflict between good and evil. T. S. Eliot, who wrote an introduction to Williams’s All Hallows’ Eve, praised the author’s "profound insight into . . . the heights of Heaven and the depths of Hell, which provides both the immediate thrill, and the permanent message of his novels," and Time magazine called him "one of the most gifted and influential Christian writers England has produced this century."

▼▲
"One of the most gifted and intellectual Christian writers England has produced in [the twentieth] century." —Time