All God's Critters
By: Bill Staines 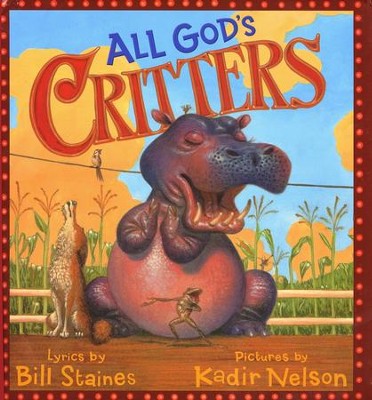 ▼▲
From big to small, quiet to loud, feathered, flippered or furred, all God's critters have a place in this choir! They are a raucous, jubilant bunch that's waiting for you to join in because everybody has a part to sing. It doesn't matter if you sing like a bird, howl like a wolf, or croak like a frog, what part do you want to sing? Recommended for ages 5 to 8.

All God's critters have a place in the choir! And this jubilant and raucous bunch is waiting for you to join in because everybody has a part to sing. It doesn't matter if you sing like a bird...howl like a wolf...or croak like a frog!

▼▲
Kadir Nelson is an award-winning American artist whose works have been exhibited in major national and international publications, institutions, art galleries, and museums. Nelson is the illustrator of many beloved, award-winning, and bestselling picture books including, We Are the Ship: The Story of Negro League Baseball, winner of the Coretta Scott King and Robert F. Sibert Award; Thunder Rose, written by Jerdine Nolen, which received a Coretta Scott King Illustrator Honor Award; Ellington Was Not a Street, written by Ntozake Shange, which received a Coretta Scott King Illustrator Award; Hewitt Anderson’s Great Big Life, written by Jerdine Nolen, which won the 2005 Society of Illustrators Gold Medal; and Mama Miti: Wangari Maathai and the Trees of Kenya by Donna Jo Napoli called "stunning" by Kirkus Reviews in a starred review. He is also the illustrator of Deloris Jordan and Roslyn M. Jordan’s Salt in His Shoes and Spike Lee and Tonya Lewis Lee’s Please, Baby, Please and Please, Puppy, Please. Kadir Nelson lives in Los Angeles.

▼▲
As every alumni of children's chapel can attest, this vacation Bible school favorite is about the most fun you can have in church. Nelson (Coretta Scott, reviewed Dec. 15), taking a break from a recent string of more sober topics, lets loose with high-spirited illustrations that have tons of kid appeal. Bow-tied dogs and cats sing alongside a Buddha-bellied hippopotamus, a frog, a fox and plenty of feathered friends, all of which have the solid, rounded forms of favorite toys. The red velvet drapes that serve as endpapers suggest the performance aspect, and the large trim size invites sing-alongs (although the dark font against dark backgrounds on a few spreads is difficult to read). The visual pacing reveals knowledge of how the song works in real life: the double spread with just one line of text, And the old cow just goes, 'Mooooo,'  will allow the audience to stretch out the vowel for the customary full minute or so before it's necessary to turn the page. A gatefold opens to reveal the animals in kick-line formation and full-throated bliss. The last two pages contain the sheet music, helpful as this energetic book ought to find a place in just about every choir. Ages 58. (Jan.)Copyright 2008 Reed Business Information.

▼▲
I'm the author/artist and I want to review All God's Critters.
Back
×
Back
×