BIG SUMMER BLOWOUT: 3 Days Only! Save up to 90% thru Wednesday. Shop now >
All For Liberty, DVD 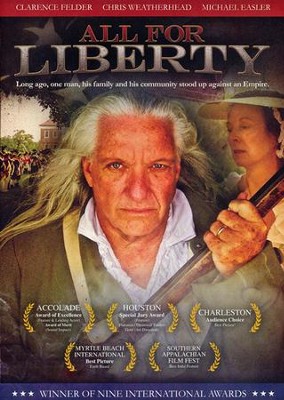 All For Liberty, DVD

Moving Images Group and Coral Gate Media are proud to present a new film directed by Chris Weatherhead. It is 1775. Henry Felder, a Swiss-German colonist, lives with his family in the Back-country of the British colony of South Carolina. However, he and his community are suffering under British injustice. After many years of struggling with corrupt British rulers, Felder is urged by the new patriot governor to write Articles of Separation from the English King. Felder's old Indian fighting comrade, Bill Jenkins forms as Tory militia to assist the Crown as the fight heats up. Felder raises his own militia, including a woman tavern owner who gathers a patriot spy ring. In the ensuing struggles Felder and his family discover the cost of freedom. All For Liberty has been named one of Top Ten American Revolutionary War Films by the Journal of the American Revolution and has won nine international film awards, three National Historical Society Awards (DAR & SAR). Dove approved (12+). Close Captioned. Approx. 82 minutes.

▼▲
I'm the author/artist and I want to review All For Liberty, DVD.
Back
×
Back
×