We are OPEN and SHIPPING - click here for shipping estimates
All but Normal: Life on Victory Road
By: Shawn Thornton, Joel Kilpatrick 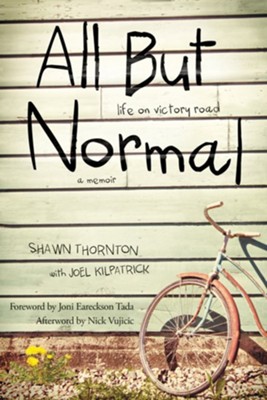 All but Normal: Life on Victory Road

▼▲
Growing up, Thornton's life was anything but ordinary. After sustaining a brain injury, his once-gentle mother suffered wild mood swings---from engaging in profanity-laced tirades to quietly befriending the poor, elderly, and marginalized. She frequently embarrassed him---until one day he discovered something about her condition that changed his life forever! A candid, heartwarming memoir. 304 pages, softcover from Tyndale.

▼▲
Growing up, Shawn Thornton’s life was anything but normal—but then, so was his mother.

After waking from a coma following a car crash, Beverly Thornton’s once sweet and gentle disposition had been replaced by violent mood swings, profanity-laced tirades, and uncontrollable fits of rage. Inside the Thornton house, floors and countertops were piled high with dirty laundry and garbage because Bev was unable to move well enough to clean. Dinners were a Russian roulette of half-cooked meat, spoiled milk, and foods well past their expiration dates. A moment of frustration might prompt her to hurl a knife at Shawn, his brother, Troy, or their dad or to vehemently cuss them out, only to shower them with love and affection moments later as though nothing had happened. And God help the family cat!

On several occasions, Bev even tried to jump out of the car on the highway while Shawn and his brother struggled to keep her inside. Yet this same woman was also a devoted Bible reader, Sunday school teacher, and friend to the elderly, poor, and marginalized wherever she went. How the same woman could be a saint one minute and a nightmare the next was a constant source of frustration for the family. Then one day, after decades of embarrassing outbursts, a surprise discovery finally helps the Thornton family come to grips with Bev’s mysterious condition and brings Shawn to a startling realization that changes the course of his life forever.

A heartwarming coming-of-age story, All But Normal is a powerful reminder that sometimes the “broken” people in our lives are the ones who need fixing the least.

▼▲
A pastor examines his childhood living with a disabled parent. The author’s mother, Beverly “Bev” Mae Thornton, grew up in a modest family in Indiana. Warm, charismatic, and smart, she began, at age 16, to go out with John Thornton, a wealthier boy with a new Corvair. One night, they were in a terrible traffic accident, which would mark the rest of their lives with unanswered questions. Thornton, with co-author Kilpatrick, re-creates this time as if Thornton was actually there for his future mother’s painstaking recovery. She was left with limited motor skills and had violent mood swings that left her “groveling painfully on the floor” before her sisters. Racked with guilt, John slowly pushed his way back into her life and toward a shared future that perhaps they never really wanted, Thornton writes. All this carefully lays the groundwork for the story of his own experiences with his mother, primarily during his middle school years. He had a loving home life, but his mother’s disabilities also made it tumultuous, and he renders it all with the complexity it deserves. There are no easy answers to the difficulties surrounding disabilities, and Thornton and Kilpatrick reinforce that idea with each new story of embarrassment or, sometimes, terror. Well-balanced narration shows how the young Thornton slowly came to understand just how disheveled and odd their house was, particularly as his mother’s rage and erratic behavior intensified, he says, to include flying plates and threats with scissors. These moments are matched with equal instances of support, tenderness, and humor that help make Thornton’s home feel relatable; it also plays well into the narrative’s overall goal as a Christian testimony of faith. Although the author says that living with his mother brought constant surprises, he also writes, “It never struck me as strange that the woman holding scissors over us...was also my greatest example of what it means to live and love like Jesus.” A religious debut memoir that carefully brings an engaging, complex family to life.
Told against the background of his mother’s mental illness, Shawn Thornton shares his coming-of-age story in All But Normal.
A window into the masked realities of mental illness—a rare, untold perspective on the tempestuous nature of family life from behind closed doors—where a mother’s psychological and physical debilitations wreaked havoc throughout the dysfunctional childhood home in which her son grew up. This memoir also looks at how he came to embrace the underrated value of brokenness—and what led him to the profound life lesson that, when it comes to family, normal is a relative term. A heartwarming coming-of-age story, All But Normal is a powerful reminder that sometimes the “broken” people in our lives are the ones who need fixing the least.

▼▲
I'm the author/artist and I want to review All but Normal: Life on Victory Road.
Back
×
Back
×