Skip to main content
SPRING CYBER EVENT STARTS NOW: And it's a really BIG deal! Up to 88% off through 5/24>
All Around Trucktown [With 3 Double-Sided Crayons]
By: Benjamin Harper
Illustrated By: David Shannon, David Gordon
Stock No: WW941940 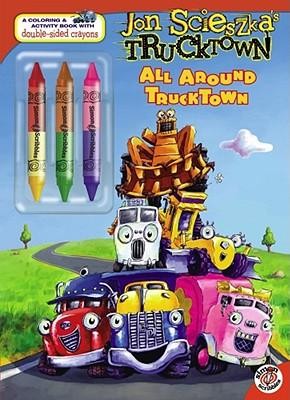 All Around Trucktown [With 3 Double-Sided Crayons]

▼▲
Rev your engines for another rip-roaring adventure in All Around Trucktown, a coloring & activity book that comes with 3 double-sided crayons perfect for on-the-road fun!

▼▲
David Shannon has written and illustrated numerous award winning picture books including Duck on a Bike, the Caldecott Honor Book No David!, How I Learned to be a Pirate, and Good Boy Fergus. He is also one of the collaborative illustrators in Jon Scieszka’s Trucktown series.  David lives with his wife and his daughter in Los Angeles.

Loren Long illustrated President Barack Obama’s Of Thee I Sing; the newest version of The Little Engine that Could by Watty Piper; Madonna’s second picture book, Mr. Peabody’s Apples; Nightsong by Ari Berk; Frank McCourt’s Angela and the Baby Jesus; Love by Matt de la Pe&ntilde;a; and If I Was the Sunshine by Julie Fogliano. He also wrote and illustrated the Otis series and was part of the Design Garage for Jon Scieszka’s Trucktown series. Loren’s work has appeared in Time, Sports Illustrated, Forbes, The Wall Street Journal, and The Atlantic. He lives with his wife and two sons in Cincinnati, Ohio. Visit him at LorenLong.com.

▼▲
I'm the author/artist and I want to review All Around Trucktown [With 3 Double-Sided Crayons].
Back