Skip to main content
SPRING CYBER EVENT STARTS NOW: And it's a really BIG deal! Up to 88% off through 5/24>
God is Alive and Well: The Future of Religion in America - eBook
By: Frank Newport
Stock No: WW93213EB 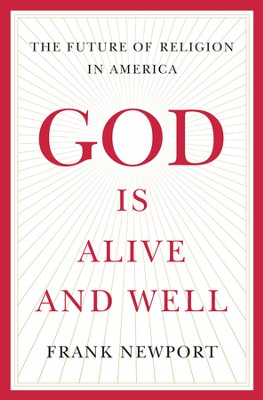 God is Alive and Well: The Future of Religion in America - eBook

▼▲
In God Is Alive and Well, Newport provides a new evidence-based perspective on Americans' religious beliefs and practices, while offering heady, controversial predictions about religion's future in the U.S. The book looks at religion in America from the important angles of age, gender, class, race, family status, geographic region, and more. It boldly dissects religion's important relationship with politics and notes that Americans may increasingly come to recognize the mounting evidence that religion is good for their wellbeing and health.

Grounded in more than a million Gallup interviews, this book shows that not only do a majority of Americans believe in God and say that religion is important, but that religion is intertwined in most aspects of their daily lives. It is entirely possible, Newport argues, that religion will be even more important in the years ahead.

▼▲
I'm the author/artist and I want to review God is Alive and Well: The Future of Religion in America - eBook.
Back
Back