Skip to main content
Alien in My Pocket #5: Ohm vs. Amp - eBook
By: Nate Ball
Illustrated By: Macky Pamintuan
Stock No: WW71374EB 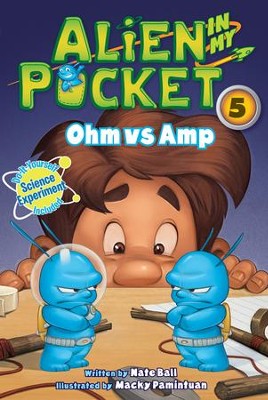 Zack and Amp get a serious surprise in the fifth installment of this intergalactic chapter book series by Nate Ball, the host of PBS's Design Squad and Design Squad Nation. Zack and his alien friend, Amp, discover that leverage can be an Earth-saving thing when they build a rocket-launching atlatl!

Zack McGee's life has been filled with trouble since Amp, a four-inch-tall alien scout, crash-landed into Zack's bedroom. But now it's Amp's turn to be in the hot seat. When his commander, Ohm, arrives to take Amp back home, the aliens feud. Amp has to get his cranky counterpart off Earth before they all end up in a world of trouble!

Like every book in the Alien in My Pocket series, Ohm vs. Amp mixes Common Core–aligned science, and safe, hands-on experiments with a hilarious story that young readers will love.

Publishers Weekly said of Alien in My Pocket: Blast Off!: "With its screwball comedy and lively dialogue, the novel gives readers the opportunity to laugh as they learn."

Nate Ball is the host of the Emmy and Peabody award-winning PBS reality shows Design Squad and Design Squad Nation. An MIT graduate with a master’s in mechanical engineering, Nate is also the cofounder of Atlas Devices, a two-time All-American pole-vaulter, and a competitive beatboxer. He lives with his wife in Cambridge, Massachusetts.

Macky Pamintuan is an accomplished artist who lives in the Philippines with his wife, Aymone; their baby girl, Alison; and a West Highland white terrier named Winter.