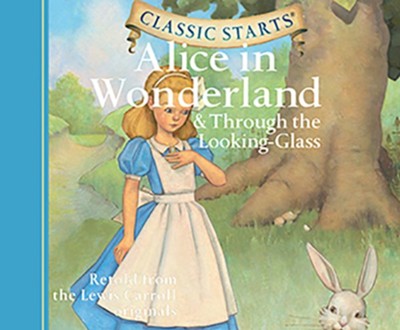 Nothing’s more magical than going down the rabbit hole and through the looking glass with Alice. There, in worlds unlike any other ever created, conventional logic is turned upside down and wrong-way round to enchanting effect. Children will love reading Carroll’s many humorous nonsense verses and meeting such unforgettable characters as the Mad Hatter, the Knave of Hearts who steals some tarts, and the grinning Cheshire Cat (in Alice in Wonderland) and Tweedledee, Tweedledum, Humpty Dumpty, and the Jabberwock (in Through the Looking Glass).

▼▲
Charles Luthwidge Dodgson was born in Daresbury, England on January 27, 1832. He became a minister of the Church of England and a lecturer in mathematics at Christ Church College, Oxford. He was the author, under his own name, of An Elementary Treatise on Determinants, Symbolic Logic, and other scholarly treatises. He is better known by his pen name of Lewis Carroll. Using this name, he wrote Alice in Wonderland and Through the Looking Glass. He was also a pioneering photographer, and he took many pictures of young children, especially girls, with whom he seemed to empathize. He died on January 14, 1898.

▼▲
I'm the author/artist and I want to review Alice in Wonderland, Unabridged Audiobook on CD.
Back