Alice in Wonderland
By: Lewis Carroll 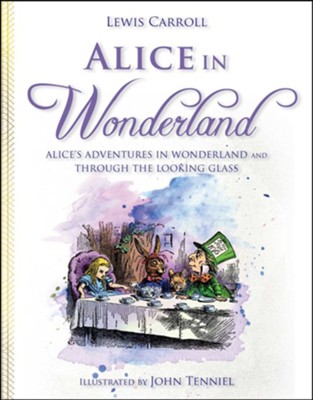 ▼▲
Featuring the original illustrations by Golden Age illustrator John Tenniel, this edition is perfect for any bookshelf, whether you’re a voracious reader of fantasy, an avid Alice fan, or a collector of illustrations and stories.

Tumble down the proverbial rabbit hole in this time-honored classic by Lewis Carroll. Follow Alice, one of literature’s most popular female figures, as she encounters a colorful cast of immortal characters such as the Cheshire Cat, the Queen of Hearts, the March Hare, the Mad Hatter, and more!

This edition also contains the sequel to Alice’s Adventures in Wonderland, where the heroine again enters wonderland by climbing through a mirror. Once again, she is confronted with a slew of friends and foes and a series of trials and tribulations.

▼▲
Lewis Carroll, sometimes referred to by his real name "Charles Lutwidge Dodgson," was an English writer as well as pursuer of many other artistic and intellectual fields. He was born in Daresbury, Cheshire, England, in 1832, and wrote poetry and short stories from a very young age. As an adult, he attended Oxford University. Throughout his life he penned numerous stories, most notably the two Alice stories. He died in 1898 at age 65.

Sir John Tenniel was a famous English illustrator and cartoonist born in Bayswater, United Kingdom. Throughout his career, he became one of the most significant contributors to the Golden Age of illustration. He illustrated political cartoons for Punch magazine for more than fifty years, provided the famed illustrations for Lewis Carroll’s Alice classics, and was knighted for his artistic achievements. He died in 1914 at age 93.

▼▲
I'm the author/artist and I want to review Alice in Wonderland.
Back
×