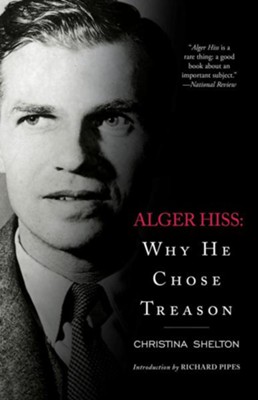 ▼▲
In 1948, former U.S. State Department official Alger Hiss was accused of being a Soviet spy. Because the statute of limitations on espionage had run out, he was convicted only of perjury. Decades later—after the Hiss trial had been long forgotten by most—archival evidence surfaced confirming the accusations: a public servant with access to classified documents had indeed passed crucial information to the Soviets for more than a decade.

Yet many on the American Left still consider Hiss an iconic figure—an innocent victim accused of unsubstantiated crimes. They prefer to focus on the collectivist ideals Hiss stood for, rather than confront the reality of a man who systematically and methodically betrayed his country.

Former U.S. Intelligence analyst Christina Shelton employs an in-depth knowledge of Soviet intelligence affairs as well as recently released Hungarian and KGB archival material to shine a fresh light on one of the most famous espionage cases. The story is dramatic, but Shelton’s analysis goes beyond sensationalism as she explores both the ideological motivation behind Hiss’s behavior and the lasting influence it has had on U.S. foreign policy.

Why exactly were the intellectual elite so deter-mined that Hiss was innocent? His accuser, Time magazine senior editor Whittaker Chambers—originally Hiss’s Soviet handler—presented compelling written evidence. However, the intelligentsia were intent on supporting one of their own. They ignored the facts, a willful blindness that helped contribute to a polarization still in place in our country today.

Thirty years of intelligence analysis gives Shelton the expertise to approach the story from many different angles, especially:

• Her persuasive argument that Communism and Fascism are not polar opposites, as has so long been claimed, but highly similar ideologies.

• How Hiss’s central role at the Yalta Conference and the founding of the United Nations are examples of the significance of Soviet intelligence recruitment of high-level Americans who could influence U.S. foreign policy in their favor.

• Why the silence surrounding the implications of Hiss’s espionage continues—and why apologists fear that smearing his name would undercut New Deal policies and the United Nations. Shelton doesn’t just detail the body of evidence pointing to Hiss’s gui< she suggests new layers of meaning in light of the current political landscape.

Today, the importance of understanding Hiss’s ideological commitment has never been more vital. His advocacy of collectivism and internationalism still resonate among the political elite, making this book an important and timely analysis of American thought at this critical juncture in our country’s life.

▼▲
Christina Shelton is a retired U.S. intelligence analyst. She spent twenty-two years working as a Soviet analyst and a Counterintelligence Branch Chief at the Defense Intelligence Agency. She has also been a staff analyst at various think tanks.

▼▲
"A vigorous reappraisal of the Hiss-Chambers espionage affair, leaving no doubt of Hiss’s guilt.
The author makes a good case for the willful blindness practiced by pro-Hiss parties involved ...

A solid look at the specifics of the case as well as a useful overview of the ideological debate gripping America." --Kirkus
“A timely reminder that the worries about national security and loyalty—concerns often derided as paranoiac, right-wing delusions—were entirely justified.” —Wall Street Journal
"Rigorous and carefully documented analysis...[Alger Hiss] is a rare thing: a good book about an important subject. Shelton makes a sledgehammer of a case…a sustained artillery assault." --National Review
“ A much needed book... With clarity, conciseness, and a sure hand, Christina Shelton guides the reader through what has become an otherwise nearly impenetrable jungle of controversy.”” -- Tennent H. Bagley, author of Spy Wars

“In Alger Hiss:  Why He Chose Treason, Christina Shelton ably captures the real Alger Hiss—his path to communism, his treason, and his conviction and imprisonment.  Her evidence is overpowering:  Alger Hiss was indeed a communist spy.  Shelton carefully connects Hiss to his historical context inside America’s political elite, which was chagrined and strangely baffled when Hiss’s treason was exposed.” --Burton Folsom, Jr. and Anita Folsom, authors of FDR Goes to War
“Shelton makes clear what Hiss did and the impact it had on U.S. intelligence. . . . A well-done book written by someone who knows.”

—David Murphy, retired chief of Soviet operations at CIA HQ and author of What Stalin Knew

▼▲
I'm the author/artist and I want to review Alger Hiss: Why He Chose Treason - eBook.
Back
Back