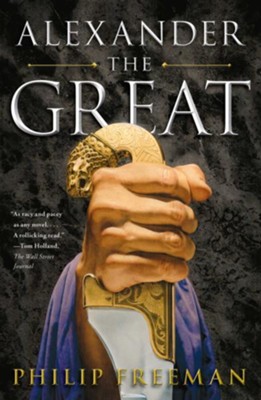 ▼▲
In the first authoritative biography of Alexander the Great written for a general audience in a generation, classicist and historian Philip Freeman tells the remarkable life of the great conqueror. The celebrated Macedonian king has been one of the most enduring figures in history. He was a general of such skill and renown that for two thousand years other great leaders studied his strategy and tactics, from Hannibal to Napoleon, with countless more in between. He flashed across the sky of history like a comet, glowing brightly and burning out quickly: crowned at age nineteen, dead by thirty-two. He established the greatest empire of the ancient world; Greek coins and statues are found as far east as Afghanistan. Our interest in him has never faded.

Alexander was born into the royal family of Macedonia, the kingdom that would soon rule over Greece. Tutored as a boy by Aristotle, Alexander had an inquisitive mind that would serve him well when he faced formidable obstacles during his military campaigns. Shortly after taking command of the army, he launched an invasion of the Persian empire, and continued his conquests as far south as the deserts of Egypt and as far east as the mountains of present-day Pakistan and the plains of India. Alexander spent nearly all his adult life away from his homeland, and he and his men helped spread the Greek language throughout western Asia, where it would become the lingua franca of the ancient world. Within a short time after Alexander’s death in Baghdad, his empire began to fracture. Best known among his successors are the Ptolemies of Egypt, whose empire lasted until Cleopatra.

In his lively and authoritative biography of Alexander, classical scholar and historian Philip Freeman describes Alexander’s astonishing achievements and provides insight into the mercurial character of the great conqueror. Alexander could be petty and magnanimous, cruel and merciful, impulsive and farsighted. Above all, he was ferociously, intensely competitive and could not tolerate losing—which he rarely did. As Freeman explains, without Alexander, the influence of Greece on the ancient world would surely not have been as great as it was, even if his motivation was not to spread Greek culture for beneficial purposes but instead to unify his empire. Only a handful of people have influenced history as Alexander did, which is why he continues to fascinate us.

▼▲
Philip Freeman is Qualley Professor of Classics at Luther College in Decorah, Iowa, and a former professor of classics at Washington University in St. Louis. He was selected as a visiting fellow at the Institute for Advanced Study at Princeton for January 2012. He earned the first joint Ph.D. in classics and Celtic studies from Harvard University, and has been a visiting scholar at the Harvard Divinity School, the American Academy in Rome, and the Center for Hellenic Studies in Washington, D.C. The author of several previous books including Alexander the Great, St. Patrick of Ireland and Julius Caesar, he lives with his family in Decorah, Iowa. Visit him at PhilipFreemanBooks.com.

▼▲
"Freeman tells us about Alexander's life like a novel—a remarkably interesting novel, to boot."
—Sarah Hann, The Saturday Evening Post

▼▲
I'm the author/artist and I want to review Alexander the Great - eBook.
Back
×
Back
×