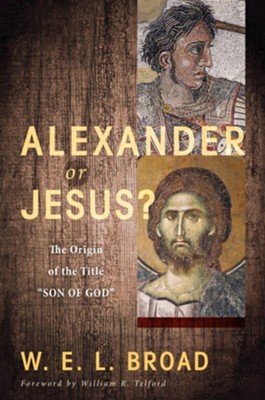 Alexander or Jesus?: The Origin of the Title Son of God - eBook

▼▲
To many people, the four Gospels are seen as biographies of Jesus of Nazareth, who was declared by God to be his Son. To many more, these Gospels are works of theology, incorporating the myths, stories, and legends surrounding a then little-known young Jew who lived two thousand years ago. This book explores the reasons why such a comparatively obscure person should be called "Son of God" soon after his death. William Broad sets stories of Jesus against the backdrop of the religions of the time and shows how St. Paul in Greece chose the mythical title "son of a god" for Jesus as being one that would attract the attention of his Gentile hearers and reveal his great significance. However, Broad notes that Jesus was not the first historical person to have been called a son of god. Alexander the Great had been so titled 350 years before. Alexander or Jesus? explores stories of this remarkable king and shows that these tales significantly affected the way the Gospels declared the Divine Sonship of Jesus. It further reveals that Jesus' birth and his epiphany are not the unique events that many believe.

▼▲
William Broad spent his working life as a Prison Chaplain and Parish Priest in the Church of England. In retirement he gained a Master of Letters degree at Durham University. He is Canon Emeritus at Durham Cathedral.

▼▲
I'm the author/artist and I want to review Alexander or Jesus?: The Origin of the Title Son of God - eBook.
Back
Back