Skip to main content
SPRING CYBER EVENT STARTS NOW: And it's a really BIG deal! Up to 88% off through 5/24>
Alexander Hamilton: The Fighting Founding Father
By: Mark Shulman
Stock No: WW4125432 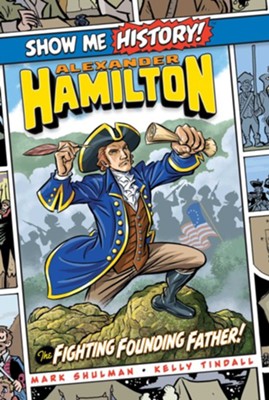 ▼▲
A fascinating and entertaining biography of Alexander Hamilton, in graphic novel format.

Alexander Hamilton: The Fighting Founding Father! tells the story of one of the most ambitious and controversial figures in American history in a graphic novel format. From a rough childhood on the Caribbean island of Nevis to the highest levels of American politics, Alexander Hamilton’s life was filled with adventure, conflict, and controversy. Full-color illustrations and an entertaining narrative make this graphical biography of America’s first Secretary of the Treasury accessible for readers of all ages.

▼▲
Mark Shulman has written more than 150 books for kids of all ages, including illustrated stories for Marvel Comics, Scholastic, Chronicle Books, Simon & Schuster, and more. Their subjects include The Incredible Hulk, Madagascar, Shamu the orca, The Amazing World of Gumball, and others. Mark started reading comics when they cost just 15 cents and hasn't stopped. He's still got Silver Surfer #1 in very fine condition, and he's not letting it go. Kelly Tindall, the award-winning writer/artist of The Adventurers: Love You Very So Much and the Strangebeard series, makes one heck of a good sandwich. He lives in Edmonton, Canada, with his wife and two daughters. For more of his work, follow him on Instagram (@mrkellytindall). John Roshell is a co-founder of Comicraft, the lettering and design studio best known for pioneering the process of digitally lettering comic books. He has lettered thousands of comics for Marvel, DC, Dark Horse, Blizzard, and more; created hundreds of typefaces widely used in comics and video games; and designed loads of logos for franchises like the Avengers, Daredevil, Black Panther, and Angry Birds. He lives in Santa Barbara with his wife Starshine, two boys, and a somewhat ugly dog.

▼▲
I'm the author/artist and I want to review Alexander Hamilton: The Fighting Founding Father.
Back