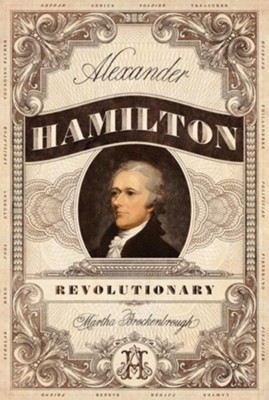 He was born out of wedlock on a small island in the West Indies and orphaned as a teenager. From those inauspicious circumstances, he rose to a position of power and influence in colonial America.

Richly informed by Hamilton's own writing, with archival artwork and new illustrations, this is an in-depth biography of an extraordinary man.

▼▲
Martha Brockenbrough draws on her diverse experience in journalism, research, nonfiction, and literary teen fiction to bring Alexander Hamilton to life. A powerful storyteller and narrative voice, Brockenbrough is the author of the critically acclaimed YA novels The Game of Love and Death and Devine Intervention. She enjoys reading Hamilton's original correspondence, playing board games, and spending time with her family. She lives in Seattle, Washington.

"A highly enjoyable, well-researched biography of Alexander Hamilton that both applauds his significant accomplishments and highlights his flaws." —School Library Journal, starred review

"Brockenbrough’s ambitious and impressively researched project gives equal weight to Alexander Hamilton’s personal and professional lives and to the history of the founding and early years of the United States." —Publishers Weekly

"The musical Hamilton has unleashed a crop of young Hamiltonians on the world, but where are they to go if they’re looking for some biographical expansion without tackling Ron Chernow’s adult work? Brockenbrough . . . comes to the rescue with this lively and affectionate treatment of the subject." —The Bulletin

"Hamilton’s life is an inspiration, a fact that Brockenbrough captures nicely in a well-written biography . . . Expect wide reader interest." —Booklist

"Brockenbrough takes the reader on a chronological journey through his life using biographical research to present a well-rounded account that explores his strengths and flaws. Interested readers will find this depth satisfying" —VOYA

Praise for The Game of Love and Death:

"Frequently hysterical . . . devastatingly honest writing that surprises with its occasional beauty and hits home with the keenness of its insight." —Kirkus Reviews, starred review

▼▲
I'm the author/artist and I want to review Alexander Hamilton: Revolution.
Back