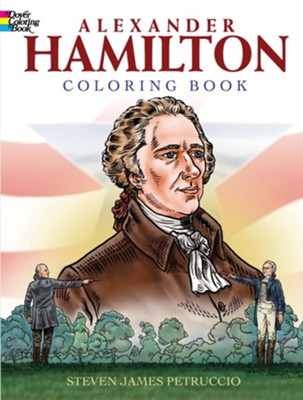 Enjoy learning about this Founding Father in American history as you add color to the illustrations and follow a timeline of his life. Along with being an important pioneer in the early formation of the nation's government, Hamilton also led troops in battles against the British established The Bank of New York, and served as first Secretary of the Treasury. Grade levels 3 - 6 (ages 9 - 12), 45 pages.

▼▲
Kids can color as they learn about the legendary Alexander Hamilton, whose fascinating life has spawned numerous books, articles, and a Tony Award®-winning Broadway musical. Captions accompany the well-researched illustrations, which recount the Founding Father's life and times, starting with his childhood in the West Indies and arrival in America. The realistic images portray Hamilton's roles as a soldier, lawyer, and statesman, climaxing in a depiction of the duel that ended his life.

▼▲
A graduate of New York City's School of Visual Arts, Steven James Petruccio has illustrated more than 60 books and is the recipient of numerous honors, including the Parents Choice Award. He is an Adjunct Professor in the Studio Arts Division at Marist College and an active member of the Hudson Valley's fine arts community.

▼▲
I'm the author/artist and I want to review Alexander Hamilton Coloring Book.
Back
×
Back
×