Skip to main content
SPRING CYBER EVENT STARTS NOW: And it's a really BIG deal! Up to 88% off through 5/24>
The Wisdom of Alexander the Great: Enduring Leadership Lessons from the Man Who Created an Empire
By: Lance Kurke Ph.D.
Stock No: WW400987 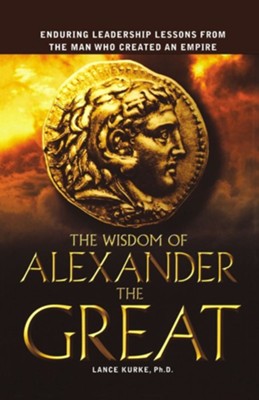 The Wisdom of Alexander the Great: Enduring Leadership Lessons from the Man Who Created an Empire

▼▲
"Exceptional leaders are the ones who are able to analyze problems, optimize resources, inspire loyalty, and execute strategy. There is no more stunning example in history than Alexander the Great, whose leadership skills were so immense that they still resonate some 2,000 years later. The Wisdom of Alexander the Great reveals four leadership processes distilled from the life and extraordinary accomplishments of Alexander, King of Macedonia. Readers will learn how he: * reframed problems in order to meet seemingly insurmountable challenges * built alliances by using his strength to generate trust and respect, not just fear * established identity and ""branded"" himself a unifier, thus keeping the home base secure while continuing to expand his empire * recognized and assimilated the cultures and symbols of different peoples, becoming a powerful and trusted figure everywhere he went The Wisdom of Alexander the Great relates 34 riveting episodes from Alexander’s expansion through Asia Minor, Egypt, Mesopotamia, the Middle East, the Persian Empire, and India. Each example, tied to a modern-day counterpart, imparts valuable lessons from the timeless legend of one of the greatest leaders in history."

▼▲
I'm the author/artist and I want to review The Wisdom of Alexander the Great: Enduring Leadership Lessons from the Man Who Created an Empire.
Back