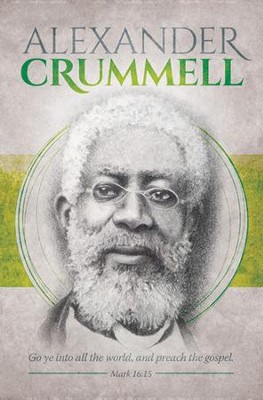 Black History - Alexander Crummell bulletin features him with the Scripture verse: Go ye into all the world, and preach the gospel. Mark 16:15 (KJV). The bulletin is shown folded (8.5" x 5.5"), exactly as church members and visitors will receive it. The back side is blank to include the information you choose. Worship bulletins arrive packaged flat 8.5" x 11" to fit into your printer or copier; shrink wrapped in packages of 100.

The back contains his biography: Alexander Crummell (1819-1898) was a minister, educator, and civil rights activist. From an early age, he was influenced by his abolitionist parents and even as a young boy worked for the American Anti-Slavery Society. Despite racial prejudice, he became an Episcopalian priest, traveling to England to lecture and further his education. Crummell developed the concept of Pan-Africanism and lived as a missionary in Liberia for 20 years. He believed African Americans should emigrate to Africa to spread the Gospel and unify the race. Black Americans, however, were not greatly in favor of this idea. Eventually, Crummell returned to Washington, D.C., where he and his congregation founded the first independent black Episcopal church in that city. During the last year of his life, he helped found the American Negro Academy.

Please note: Colors are only approximate and will vary with the settings of your monitor.