We are OPEN and SHIPPING - click here for shipping estimates
PRE-SUMMER CYBER SALE EXTENDED thru 6/1 ~ Over 2,500 items up to 90% off
Alex: The Life of a Child
By: Frank Deford 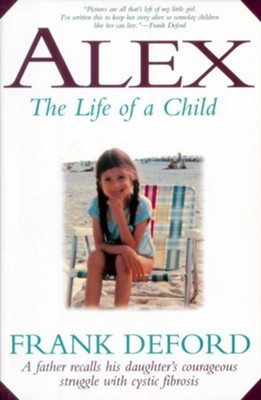 Alex: The Life of a Child

Alexandra Deford, a precious and precocious girl, was just eight years old when she died in 1980 following a battle against the debilitating effects of cystic fibrosis, the number-one genetic killer of children. Her poignant and uplifting story touched the hearts of millions when it was first published and then made into a memorable television movie. A new introduction contains information on the latest cystic fibrosis research, and a touching postcript reveals how the Deford family came to terms with the loss of Alex.

Whenever he speaks, sportswriter Frank Deford knows people will bring articles for him to sign. But what makes him happiest is when someone attends a sports-oriented lecture and brings a copy of Alex: The Life of a Child for him to sign. "Invariably, and happily, there's usually someone at each appearance who either brings that book or wants to talk about their connection to cystic fibrosis." Deford says. "It's tremendously gratifying to me. Rarely does a week go by that I don't get a letter about that book. People leave things at her grave. They really do. I have people tell me that she changed their lives. It's terribly dramatic, but they literally say that. I heard from a woman who became a pediatric nurse after reading the book. Hearing from people like that means more to me than anything."

▼▲
I'm the author/artist and I want to review Alex: The Life of a Child.
Back
×