Skip to main content
SPRING CYBER EVENT STARTS NOW: And it's a really BIG deal! Up to 88% off through 5/24>
Aleph and Other Stories
By: Jorge Luis Borges
Stock No: WW437883 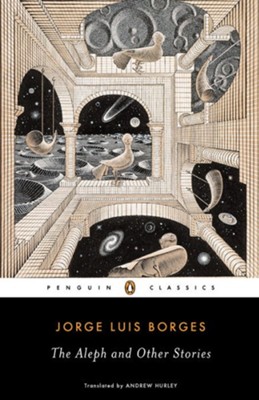 Aleph and Other Stories

▼▲
Full of philosophical puzzles and supernatural surprises, these stories contain some of Borges’s most fully realized human characters. With uncanny insight he takes us inside the minds of an unrepentant Nazi, an imprisoned Mayan priest, fanatical Christian theologians, a woman plotting vengeance on her father’s "killer," and a man awaiting his assassin in a Buenos Aires guest house.  This volume also contains the hauntingly brief vignettes about literary imagination and personal identity collected in The Maker, which Borges wrote as failing eyesight and public fame began to undermine his sense of self.

▼▲
Jorges Luis Borges was born in Buenos Aires in 1899 and educated in Europe. One of the most widely acclaimed writers of our time, he published many collections of poems, essays and short stories, before his death in Geneva in June 1986. In 1961 Borges shared the International Publishers' Prize with Samuel Beckett. The Ingram Merrill Foundation granted him its Annual Literary Award in 1966 for his "outstanding contribution to literature." In 1971 Columbia University awarded him the first of many degrees of Doctor of Letters, honoris causa that he was to receive from the English-speaking world. In 1971 he received the fifth biennial Jerusalem Prize and in 1973 was given the Alfonso Reyes Prize, one of Mexico's most prestigious cultural awards. In 1980 he shared the Cervantes Prize (the Spanish world's highest literary accolade) with Gerardo Diego. Borges was Director of the Argentine National Library from 1955 until 1973. In a tribute to Borges, Mario Vargas Llosa wrote: "His is a world of clear, pure, and at the same time unusual ideas...expressed in words of great directness and restraint. [He] was a superb storyteller. One reads most of Borges' tales with the hypnotic interest usually reserved for reading detective fiction..."

Andrew Hurley is a translator of numerous works of literature, criticism, history, and memoir. He is professor emeritus at the University of Puerto Rico.

▼▲
"He more than anyone renovated the language of fiction and thus opened the way to a remarkable generation of Spanish-American novelists. Gabriel Garc&iacute;a M&aacute;rquez, Carlos Fuentes, Jos&eacute; Donoso, and Mario Vargas Llosa have all acknowledged their debt to him." —J.M. Coetzee, The New York Review of Books

"He has lifted fiction away from the flat earth where most of our novels and short stories still take place." —John Updike

▼▲
I'm the author/artist and I want to review Aleph and Other Stories.
Back