Skip to main content
Albrecht Durer: Artist in the Midst of Two Storms
By: Stacey Bieler
Stock No: WW619652 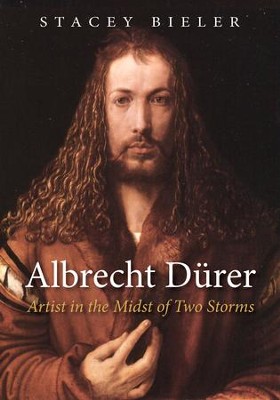 Albrecht Durer: Artist in the Midst of Two Storms

The artist and entrepreneur Albrecht Durer lived in Germany in the early 1500s, when two storms were threatening the Holy Roman Empire. First, Suleiman the Magnificent and his army of Ottoman Turks were expanding from Constantinople to Vienna, the doorstep of Europe. Second, Martin Luther, a German monk and professor, wrote his Ninety-Five Theses identifying corruption within the Roman Catholic Church. This challenged the authority of both Emperor Charles V and Pope Leo X, who responded by accusing Luther of heresy.

Albrecht Durer influenced art and media throughout Europe as strongly as Martin Luther influenced people's views of life, death, and their relationship with God. Durer's art and writing reveal how this creative and thoughtful man responded to the changes offered by Luther.

Why was Durer so attracted to Luther's writings? Why would he risk being accused of being a heretic?

Both of these men inspired changes in art, religion, and politics that still underlie the foundation of today's social structures and Western culture.

▼▲
I'm the author/artist and I want to review Albrecht Durer: Artist in the Midst of Two Storms.
Back