Skip to main content
The Song of Albion Collection: The Paradise War, The Silver Hand, and The Endless Knot - eBook
By: Stephen R. Lawhead
Stock No: WW66016EB 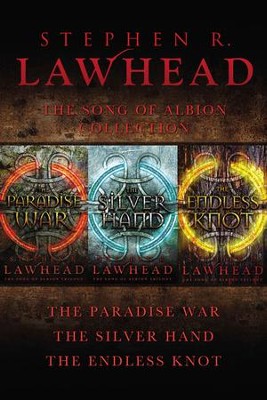 The Song of Albion Collection: The Paradise War, The Silver Hand, and The Endless Knot - eBook

Lewis Gillies is an American graduate student in Oxford who should be getting on with his life. Yet for some reason, he finds himself speeding north with his roommate Simon on a lark&ugrave;half-heartedly searching for a long-extinct creature allegedly spotted in a misty glen in Scotland. Expecting little more than a weekend diversion, Lewis accidently crosses through a mystical gateway where two worlds meet: into the time-between-times, as the ancient Celts called it. And into the heart of a collision between good and evil that's been raging since long before Lewis was born.

The great king is dead and his kingdom lies in ruins. Treachery and brutality rule the land, and Albion is the scene of an epic struggle for the throne.

Lewis is now known as Llew in this Otherworld and has become a threat to the usurper Meldron. Exiled and driven from the clan, he must seek the meaning behind a mysterious prophecy&ugrave;the making of a true king and the revealing of a long-awaited champion: Silver Hand.

Fires rage in Albion: strange, hidden, dark-flamed, invisible to the eye. In the midst of it, Llew must journey to the Foul Land to redeem his greatest treasure. As the last battle begins, the myths, passions, and heroism of an ancient people come to life . . . and Llew Silver Hand will face a challenge that will test his very soul.

▼▲
I'm the author/artist and I want to review The Song of Albion Collection: The Paradise War, The Silver Hand, and The Endless Knot - eBook.
Back
Back